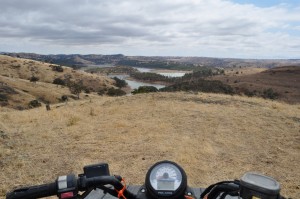 I went to the dam today. “So what?” I hear you ask “You do that all the time”

Yes, but usually it’s with Doc in the Hilux, this time it was on my own on the quad bike.

We have a lovely view of the dam from our veranda, and can sometimes hear the distant lull of motor boats in the background, but it’s a long way to walk. It wouldn’t be so bad if it was flat, but it’s downhill all the way, and, of course, uphill all the way back. And steep and rocky. 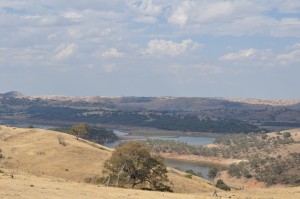 The first time I came to the farm I walked down to the dam with the friend we were here with. The boys rode their bikes, but we decided we wanted a walk. It was a long way down, but pleasant, and when we got there, there was the promise of a swim to cool down. Walking back, however, was another thing entirely. At every crest we kept expecting to see the house. “It’s just over the next one” we told each other, time and time again. I swore I’d never do it again. And I haven’t.

But now I’m here on my own, and it’s hot and I wanted a swim. I had two choices. Walk down, and undo all the cooling effects of the swim on the way back, or ride the quad.

So, with some trepidation I decided to ride. 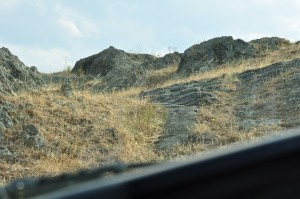 I’m new to quad biking, and still a bit nervous. But I had all the experience of sitting next to Doc in the hilux while he drove, so I knew all the lines to take. I also had his advice going through my head “try to always go up or down hills, not across them, and put your weight on the uphill side of the bike to balance it out and stop it tipping.” Unfortunately sometimes the hills just don’t point in the direction you want to go, so you have to go across rather than up or down.

And that’s when I get really nervous, and think about all those quad bike accidents I’ve read about in the paper. 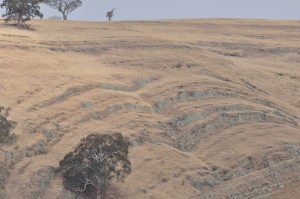 Most of the trip down wasn’t too bad. It’s steep but mainly up and down, not across. But there is one section where I broke out in a sweat. It’s steep and rocky, and the only way is to climb down the rocks (on the quad), or take a line where the bike will be at a 45 degree angle sideways – with a steep rocky drop off only centimetres away.

I had no choice, over the rocks it was.

So in low gear, hand and foot on the brake, I inched my way forward, sitting so far back I was almost on my camera gear in the tray. When my headband fell off and my hair blew across my eyes I had a(nother) moment of panic, but perched on those rocks I couldn’t stop to pick it up. I think it might even have been easier when I couldn’t properly see what I was climbing over or the full horror of what could happen if I tipped. Ignorance really is bliss! 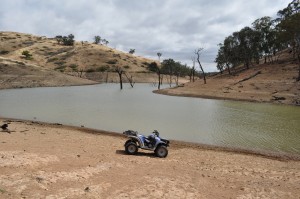 But I made it, all the way to the bottom, and had a congratulatory swim to cool off. And while I was swimming two kangaroos came down for a drink not 20 feet from where I was floating in the water. Magic! And well worth the trip.

Knowing that I made it down so I could make it back up again I got back on the bike and started the engine. It only took a few metres to realize that what seems a bit steep coming down feels vertical when you’re going up it. I was practically sitting on the handlebars and willing the front wheels to stay on the ground so hard that I didn’t even think about what was coming up ahead of me. 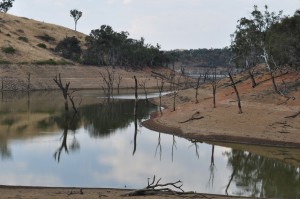 Then I reached the steep, rocky bit and I pulled up. I wanted to cry, or stop and camp there for the night. But neither of those was really an option, so I parked the bike and walked around, deciding whether I’d be less injured if I tipped over sideways down the hill or if I tipped over backwards climbing the rocks.

Somehow I just couldn’t overcome the fear of being at a sideways angle, so climbing the rocks it was.  So thinking back to Doc’s advice “keep your weight forward, keep moving but don’t go too fast. It’s all about throttle control” I tackled the rocks. I think I stopped breathing for a while because when I got to the top I let out a big sigh of relief.

It wasn’t until I got back to the house that I started feeling elated, like I was walking on air. I made it!!! Down to the dam and back on the quad. So I poured myself a glass of champagne and drank a toast.

“To overcoming fears and having adventures.”