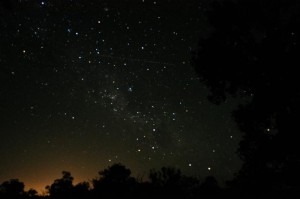 It’s Valentine’s Day tomorrow, and what better way to celebrate than camping.

Have a candlelit dinner, snuggle up by the fire, and look at a million stars above you. What could be better?

Seriously. Camping is both romantic and sexy.

People have always described adventure and the great outdoors as romantic. And when you see it on a movie screen it looks that way – especially if somebody like Harrison Ford is playing the hero. But it’s more than being in the great outdoors. Camping, and what you can do while camping, is romantic.

Just imagine – you pull up at a bush camping site, set up your camp (even the most elaborate don’t take that long), sit with a glass of wine and watch the sunset, eat dinner by candlelight, then sit around an open fire looking for shooting stars amongst the millions in the sky before retiring to a comfortable bed. Who wouldn’t feel romantic?

So I’ve put together a list of the top ten romantic things we’ve done while camping. Some of these you can do without camping, but you often have to pay a premium. It’s hard to top the experience of doing them on a budget, and all on the one trip. And often with nobody else around.

Snuggled by an open fire and watched for shooting stars

Walked hand in hand along a deserted tropical beach

This post was originally published on 4 September 2011 while we were on our trip to Cape York. I haven’t changed my mind and have had many more romantic camping trips and experiences since. It only gets better!