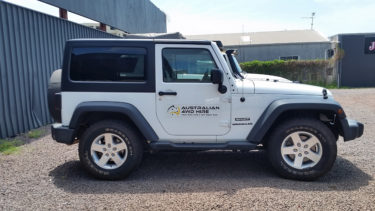 It must be one of the most effective marketing campaigns ever. “So you bought a Jeep”.

I didn’t buy one, but I did hire one. To be completely accurate, I hired a small 4WD to get us around Kakadu and that’s what I got. A Jeep Wrangler. Even the hire companies have succumbed!

My Vitara has been giving me a bit of grief lately, so this was a good opportunity to test drive the Jeep and see if I wanted to trade the Suzuki.

So how did the Jeep go? 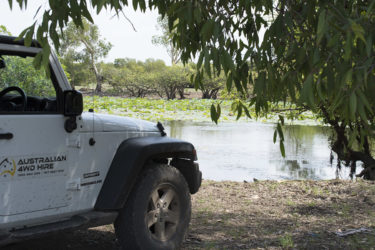 The car feels like it’s a left hand drive that’s been converted to right hand drive. Badly. The pedals just don’t seem to be in the right positions.

And the seat itself is uncomfortable. Rather than sitting up so you can see over the bonnet, which you need to do when you’re off road, you sink right into the seat. I don’t like that in a car at the best of times, and certainly not when I’m driving a track that needs constant attention and concentration.

Suzuki wins this one hands down. 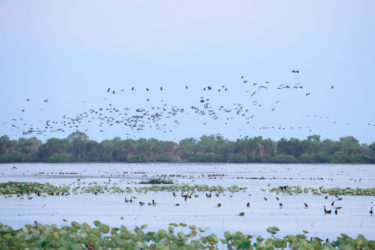 On our trip the fuel consumption ranged between 12.8 – 13.9L per 100k. Definitely much worse than I thought it would be.

I know you shouldn’t rely on the gauges in a strange car, but you should be able to expect that if there’s a problem the hire company will tell you. While travelling around Kakadu the gauge told us we had 179k to empty. We hadn’t travelled quite 400k yet, mostly on tar, and we only had about 80k still to drive (all on tar) so thought we would be fine. We almost ran out of petrol. When we got back I put in 61.1L of fuel, after travelling only 473k.

Again – Suzuki wins this one. 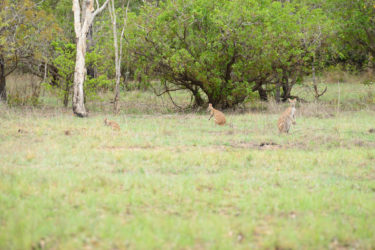 On the highway the Jeep was a much smoother ride than the Suzuki. And – let’s be honest – most people who succumbed to that advertising campaign are only driving on the highway.

Jeep wins on the highway.

I don’t know if it’s Jeep, or a badly serviced hire car, but changing into 4WD was very difficult. It required two hands to do it, and could only be done from the passenger seat because of the angle when sitting in the driver’s seat. We tried everything – changing in park, in neutral, in drive. One of us had to move the gear stick back and forth while the other worked on the transmission stick. We’d finally manage to get it into 4WD, but then it would jump out again. It even jumped out of low range while we were driving once.

But once it was locked it, the Jeep did everything we asked it to. Sand, mud, water, corrugations. It was a lot smoother over corrugations than the Suzuki, but that doesn’t make up for the transmission change problems.

Suzuki wins this one. 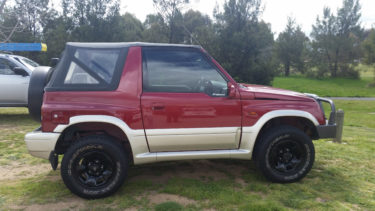 Even though it’s a short wheel base, the Jeep doesn’t feel like a small 4WD. It is wider than the Suzuki, and feels heavier. It still has those little Jeep quirks – doors that you need to slam and a bonnet that locks down with clips on the outside – which make Jeep what it is and you either love or hate.

So would I buy one?

No, the comfort factor alone is enough to put me off. But it did everything we asked it to off road, and we had a lot of fun for a few days.