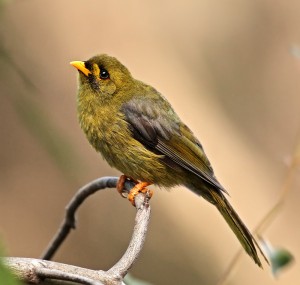 Hands up all who know what a bellbird sounds like, or where they can be found. Or even knew what it looked like before seeing the photo on the left. OK, let’s make it a bit easier. Hands up all who have heard of bellbirds.

I grew up hearing about bellbirds, and learned the poem at school, yet in all my travels it’s a bird that I’ve never thought about.

I’d forgotten about them so completely, that on our girlie weekends to the Hunter Valley, the metallic sound coming from the eucalyptus forest we were driving through had me stumped. Driving along in the convertible with the roof down I heard a noise – sort of like when you flick a wire and it vibrates, but louder obviously. At first I thought it was something on the car, so I turned the music up and tried to ignore it. But when I heard it again at the same spot on the next trip I realized that it must be something outside.

“What’s that noise?” I asked Helen

“What noise?” she responded.

“Listen”, and we heard it again. We asked people what it was, describing “a metallic sound, like a vibrating wire or something”, and we got some very strange looks. People driving with their car windows up hadn’t even heard it, and nobody knew what it was.

Until we were standing with a local when we heard it. “That noise” we said excitedly. “You mean the bellbirds” he said, giving us a look that spoke volumes. Der! 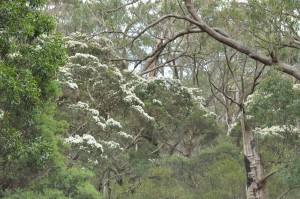 All at once the memories came flooding back.

By channels of coolness the echoes are calling,
And down the dim gorges I hear the creek falling:
It lives in the mountain where moss and the sedges
Touch with their beauty the banks and the ledges.
Through breaks of the cedar and sycamore bowers
Struggles the light that is love to the flowers;
And, softer than slumber, and sweeter than singing,
The notes of the bell-birds are running and ringing

Perhaps that’s why I didn’t recognize it. That metallic twang is not exactly what I’d describe as “softer than slumber and sweeter than singing”!  But still – to not even think of bellbirds!! 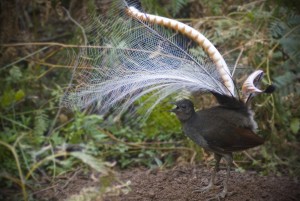 So I did some more research. Something called a “bellbird” should be pretty. I was imagining something like a lyrebird.

Looking through my Complete Atlas of Australian Birds, the name “bellbird” didn’t stand out anywhere. As a matter of fact, it’s not even mentioned in the table of contents, so I had to go to the index.

There are two – the crested bellbird, which is found further west so wasn’t the one I was after. And the Bell Mynah. Yes, it’s a mynah bird, though even with the use of the book I can’t work out if it’s related to the Indian Mynah.  The Bell Mynah (or Miner) is listed among the honeyeaters, while the Indian (or common) Mynah is listed with the starlings. To make matters even more confusing, the Crested Bellbird is listed with robins, whistlers and flycatchers. 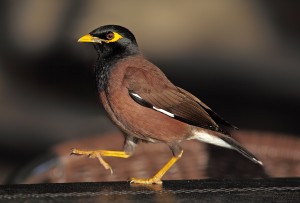 I think it’s going to take a while until I get the hang of this bird watching thing. At least the book did confirm one thing – I wasn’t completely insane when describing the sound. The Readers Digest Complete Book of Australian Birds describes the Bellbird’s song as “Continual, single-note, metallic, high, bell-like tink or plink, explosive at close quarters and far-carrying.” Yep, that’s what I heard!

At least it wasn’t something wrong with the car.