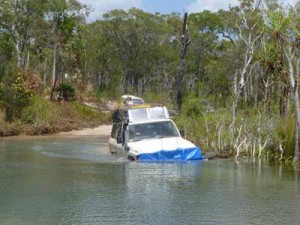 If you watch our Old Tele Track video you’ll hear Doc say that in celebration a number of times. Along with “60 to the rescue.”

He loves his 60 series, with good reason. It’s taken him across Australia, through the Simpson, along the Canning, up the Old Tele Track and to lots of other places. It’s pulled others out of holes – mud, sand, water – and continued chugging along.

So when we got bogged coming into the farm the other night Doc wasn’t very happy.

To be fair (or to make excuses), it was very boggy, it was dark, and we were towing a trailer. And just before we got bogged the mate who was following us overtook on the outside, forcing Doc to take the route closer to the fence where the ground was muddier and there was less room to manoeuvre. But still … we were in the 60. 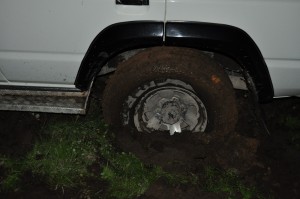 When we turned into the farm gate the road was dry and we were kicking up dust. But it’s like that out here – the high ground can be perfectly dry but as soon as you get into a dip it’s full of water and mud. Ground water sits just below the surface when it’s been raining.

We came through a couple of muddy patches where you could feel the car start to slip on occasions, then we got to what we knew was going to be the hard part, and where we’ve been stuck before, again when we were towing a trailer – but not while driving the 60!

It starts with a short, slightly downhill section, followed by a fairly long, straight run, then a 45 degree uphill. It also slopes slightly uphill on the right hand side. Of course, that means water pools down the bottom, which is where we’ve been stuck before. 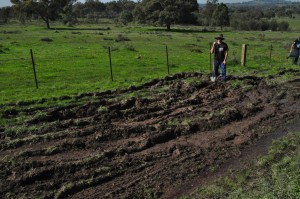 This time we made it through. The car slipped and slid around a bit, but we made it along the flat. As we started going uphill I said to Doc “Are you still in 2WD?” Of course he was, he prides himself on the 60 making it through all sorts of ground in 2WD where others whimp out and use 4WD.

Maybe I jinxed it, because that was the exact moment that we lost momentum, the wheels started spinning in the mud, and we stopped going forward. Now that’s the point where logic would tell you to stop, but most people don’t. They keep revving and revving while the wheels spin them deeper and deeper in the shit.

Well, Doc is logical, especially when it comes to his ‘baby’. He stopped. He put it into 4WD and got out and locked the hubs. Then he reversed out of the hole he was in. And jammed the trailer up against the fence. 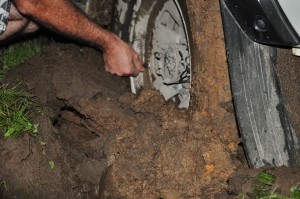 He tried moving forward again to get the trailer clear, but no luck. He revved more and tried again. We were stuck fast. The only thing that was happening was the wheels were churning up mud that appeared to be mixed quite heavily with cow poo– it stank.

So while I sat in the car protecting my new uggies (there was no way I was getting them covered with muddy cow shit) Doc got out and looked around the car to see how much trouble we were in.

I don’t know whether you’ve tried this before, but walking through thick, very boggy mud in thongs is not really a good idea. I lost a thong once when I sank up to my knees in mud, and it was either keep sinking or drop the thong and pull my leg out. I choose to lose the thong, but only after the third attempt to get it out when I was up to my thigh! 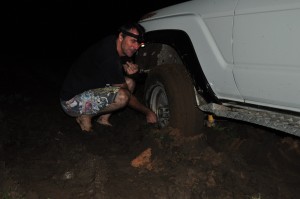 Even if you don’t sink, thongs stick to the mud so when you take a step they don’t step with you, then when you very carefully step back into them and very carefully step them out of the mud they lose traction completely and you slip over, and end up on your arse in the mud.  If the mud is mixed with cow shit the likelihood of slipping over in it increases exponentially.

Yes, Doc ended up on his arse.

Lucky his mate was coming back over the hill in his Hilux at that exact moment and watched it all happen.

Even luckier there were now two of them to walk around and inspect the damage “Yep, you’re stuck.”

So they conferred and decided to winch us out. Doc pulled out the winch cable to hook it up, then discovered he didn’t have the switch to turn it on. Or to roll the cable up again. Apparently somebody thought it was a good idea to put it away in the garage somewhere rather than keep it in the car with the winch. It’s tidier that way. 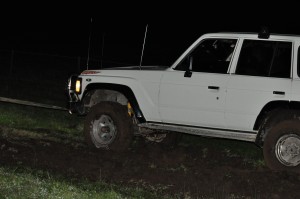 Finally, Doc admitted there was nothing else to do but let down the tyres and get snatched out. But as even the rescue car was on boggy ground they decided to drop the trailer and leave it where it was until the next day.

They hooked up the snatch strap, conferred again, and got into their vehicles. They revved, they dropped their clutches and … Doc moved forward a little while his mate started churning up mud. They paused, they tried again. They started churning up more mud, then they both moved.

A cheer went up. We were free!

And the best part of the whole episode? Our friends had a spare pair of gumboots so I could get out and take photos!