It’s obviously been raining in the desert.

One thing I love about Australia is the colour – the red of the desert, the lush green of the tropics, the blue of the sky. 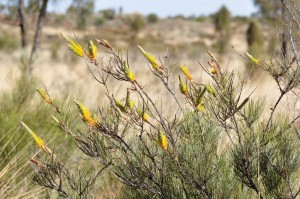 Coming out to the centre I expected red, lots of red dust. And I haven’t been disappointed. We’ve camped in it, got in all through the car, our clothes and even ourselves. It’s red, and very soft. I love it.

But what I didn’t expect was the green. There is so much of it in so many shades. And the wildflowers. It rained out here a couple of weeks ago, and the desert has come to life.

We went to Kata Tjuta yesterday. Now I know there are rock formations out there, you can see them for kilometres. Watching the sunrise over Uluru the other day you could see Kata Tjuta in the background as the sun lit that up as well.

But when we got there I couldn’t stop looking at the plants. 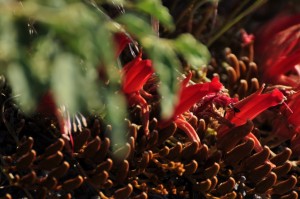 There were trees, shrubs, grasses and wildflowers. Masses and masses of wildflowers. Mostly very delicate flowers – small, and pale and barely discernible in the silver grasses. But when you stop and look you can pick them out, until it’s all you can see – yellow, mauve, pink and white carpeting the desert floor. Set against the red of the dirt it’s an amazing sight.

Helen bought a painting at Uluru, which has an amazing iridescent green through it. It was painted in the week after the rains when the grasses and flowers pop up from where they’ve been lying dormant. And when we got to Kata Tjuta yesterday we found that it really was the same green as some of the grass out there.

These photos were all taken at Kata Tjuta yesterday. Some are unique to the area, like the Kata Tjuta wattle, but others can be found throughout the centre. But only after it rains.