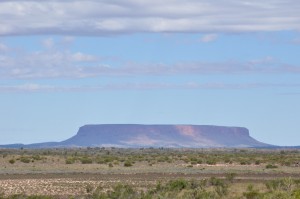 Not desert like you expect in central Australia anyway.

Driving along the highway to Uluru we were surprised by how green everything is. It’s flat country, and grass and shrubs abound. There are even tall trees at points along the way.

Coming around a curve about 160k out I looked to my left “F**. Is that it?” I asked Helen. It was a big rock, sitting on the otherwise flat landscape.

We drove further. As we changed angles the appearance and colour of whatever it was we were looking at changed.

“It must be” we agreed “What else would it be?” We stopped to take some photos.

As it turns out it wasn’t Uluru, but Mt Connor. And we weren’t the only ones who got confused, apparently it’s a common error. But Mt Connor was impressive, if the rock was anything like that it would be good.

Finally we got to the camping ground, checked in and set up our tent. Then we opened the bottle of champagne we were saving for just this event. We were planning on sunset at the rock, but after a bottle of champagne decided Uluru would still be there tomorrow, we wanted a campfire! 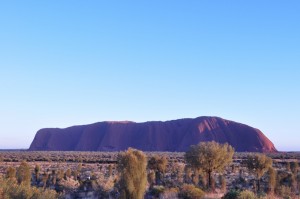 I got up before dawn to go out and watch the sunrise over the rock. It was nice, but not as spectacular as I was expecting. And cold – very, very cold. Even if it doesn’t look like desert, it has desert weather. Warm during the day and freezing cold at night – and even colder pre-dawn.

Once I got to the viewing platform I realized my tripod wasn’t tall enough to get over the fence and the heads in front, so I had to take my scarf off to prop up the video camera on the top of the railing to film the sunrise. Now that’s dedication – it was icy! My hands were frozen and once I took off my scarf so was my neck!

Once the sun was up I retired to the Cultural Centre for a warming cup of coffee and to get ready for the base walk. 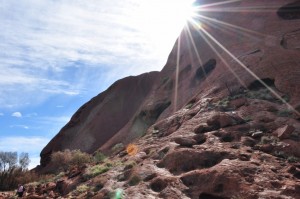 This is where I’m going to get all “mystical”, so you might want to tune out now.

The rock feels alive. If you listen to it, it hums. Around the rock, if you stay still, you can hear the birds and the wind through the grass and leaves, but that’s not the sound of the rock. You have to lie on the rock with your ear up against it to hear it, but it’s there. It hums.

As you wander around and read the Aboriginal stories along the way you start to understand its significance in Aboriginal life, and how the stories came into being. You can see the marks on the rocks that demonstrate the stories. 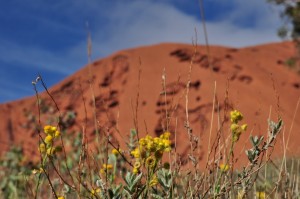 I’ve been told that to really appreciate the rock you have to be a long way from it. I disagree, the majesty is in the detail as much as the soaring heights. The trees, flowers and bush tucker around it; the peaceful rock pools; the crevices and caves that provide safety and protection from the elements; the rock paintings showing life and learning; the sacred places. It’s all there if you get up close and personal, and take the time to feel it as much as see it.

I’ve seen the footage of Gough Whitlam ceremoniously pouring the handful of red dirt into the hand of Vincent Lingiari. You’d be hard pressed to find the red dirt now. It’s there, sure, but there’s also grass, trees, shrubs and even flowers if you can take your eyes off the rock long enough to look around. 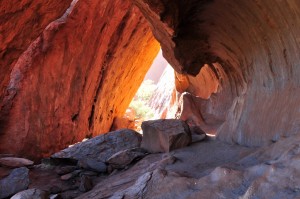 So there you are – that’s the end of my dreaming story. I’ll try to get back to practical matters tomorrow – but first there’s a sunset later today.

Now, the battery on the lap top is running low and the sun is shining. I’ve quickly picked out a few photos, but obviously there are a lot more. These will have to do until I can recharge the computer.