Julia Creek – home of the Dirt n Dust … and crays 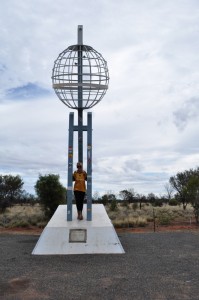 Mt Isa. What can I say? Broken Hill it aint.

After 15 hours in the mining town in western Queensland I was ready to leave again, and not just because the Wallabies lost to the British & Irish Lions and I was watching at the Irish Club.

We needed some warmth as the cold in Alice was seeping into our bones, and decided on Mt Isa. It’s a long, long drive, and we didn’t leave Alice until mid afternoon. We got a couple of hundred ks, and crossed the Tropic of Capricorn before we set up camp in a roadside rest area. It was a pretty spot, with camping areas set into the trees – and as busy as a caravan park. 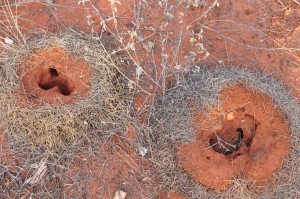 We set up our tent, then discovered we were right next to some viscious looking nests/holes in the ground. I have no idea what was in there, but fortunately whatever it was didn’t come out during the night. We had a big camp fire (courtesy of the young couple camped next to us volunteering to get us some wood), watched the stars for a while and went to bed. Then it got freezing!! I have a warm sleeping bag, and was sleeping in thermals, but still I needed to put on an extra pair of socks and cover myself with thick jacket over the sleeping bag.

But that very cold temperature meant a clear night – finally we would get some sun. 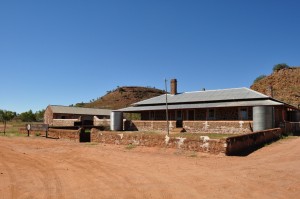 After a very leisurely breakfast and start to the next day, we were on the road at 11.30. It was sunny and warm and already our spirits were lifting. We made a few stops along the highway to look at places of interest and arrived at Tennant Creek around 5pm. The caravan park provided big barbecue pits, with hotplates for cooking on and an enormous pile of wood. I cooked another camp oven dinner and we were sitting quietly watching the stars and the fire, when it started.

From right next door to the park came the dulcet tones of drunken screaming and yelling. And it went on all night, settling only as the first rays of the sun were peering over the trees. It was another 680 odd ks to Isa, and if we were going to make it that far we needed to get on the road early anyway, so it wasn’t a bad thing that I was up at dawn. 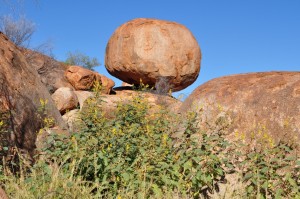 I’ve never been to Mt Isa so was interested to see what it was like, after all, I loved Broken Hill. Both towns are mining towns and both are dominated by the big mines right next to them, but that’s it with the similarities. Where Broken Hill is vibrant and creative, full of art galleries, music and interesting people, Isa just seemed, well, dead.

It probably didn’t help that we arrived at 5.30 on Saturday afternoon and everything was closed, and that nothing, not even the big Woolies supermarket, was open on Sunday.  And that everything is so spread out.

Isa is shaped like a semi-circle, with the mines all along its straight edge. On one corner is the RSL and at the opposite corner is the Irish Club. At the top of the semi-circle is the caravan park. .And there’s not much in between, at least not on weekends. 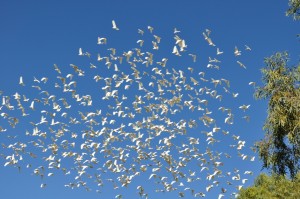 It probably also didn’t help that on our drive along the Barkley Highway we stopped first at Barkly Homestead, with its frangipani and bougainvillea gardens, wide open spaces – and foxtel on the tv in the bar. Next stop was Camooweal just over the Qld border. Again, it was beautiful, with a lovely camping spot by the river, nice walks, a great café, and a pub with good food, a verandah to sit on (it was 28 degrees), and – you guessed it – foxtel on the TV and a commitment to watch the rugby.

I would have been happy to stop at either, even to spend a few days at Cammoweal just relaxing and walking around, but we had a previous engagement in Isa so had to continue.

Once there the caravan park wasn’t where it appeared on Google Maps, so we had to drive around a bit to find it. Then the dirt was so hard that I couldn’t drive the tent pegs in and just had to hope for the best that it wouldn’t get windy that night.

I think you’re probably starting to get the picture here – things just didn’t go right to make me like Mt Isa. 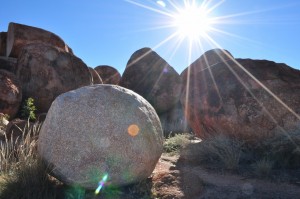 I’d told a friend that I’d drop into the RSL for her, but we were meeting our other friends at the Irish Club. Not wanting to drive after having a couple of drinks (I was going to watch the rugby remember) we took the courtesy bus from the caravan park to the club. That was the best thing about Isa. All we had to do was call and the bus came to pick us up, the driver was great and gave us a potted history and insight into Isa. But of course, the bus only went to the Irish Club so I didn’t get to the RSL (sorry Jenny)

And then, not only did the Wallabies lose, but our friends didn’t even turn up!

So next morning, still feeling a bit churlish, I got up early, got Helen up, packed up and left.

Now we’re on our way to Julia Creek, a very pretty town a couple of hundred ks to the west on the same longitude so it should still be warm. After all the constant travel it’s time for some R&R, and, if we can find some water, some fishing for Helen.

Permanent link to this article: https://kathswinbourne.com.au/alice-springs-to-mount-isa/