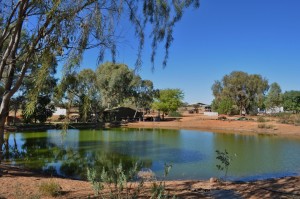 It’s not all bush camping when you’re out on the road.

Caravan parks have services and facilities including showers & toilets, fresh water, camp kitchens, even bars and restaurants. If you’re in a non-service area (there’s an awful lot of them when you’re “out bush”) they’ll even have a public telephone you can use and often wi-fi.

Even national parks can have water, showers and toilets, even barbecues and picnic benches, depending on where you are. In many towns outback there’s an area, such as the local showground or a reserve, where you can camp cheaply with access to water and facilities.

We’ve stayed at some lovely camping spots while we’ve been out.

For the Blackall Festival we camped at a beautiful spot beside the Barcoo River. It was almost bush camping – there was nothing in the reserve but it was just a short walk to showers and toilets, and all the facilities of the town. Including the bakery & café!

A big worry for me this trip was driving along the Plenty Highway. It’s dirt, designated 4WD only and just longer than my fuel tank will take me. There were fuel stops along the highway, but having been off road before I know that often those fuel stops don’t have any fuel. You can be stranded for a week waiting for more fuel. 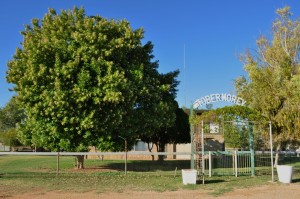 But, we did it anyway. We refueled in Boulia, the last stop before hitting the Queensland side of the highway. Then it was a 250k drive to the border, where Tobermorey Station had camping and more fuel. We pulled in there late afternoon and were greeted by a lovely grassed area, with beautiful gum trees, barbecues, picnic benches and showers and toilets. We had a great night sitting around the campfire talking with the blokes camped next to us, and then sleeping with the cover off the tent so we could watch the stars. Mike (the bloke from the campsite next to us) even made us coffee with his Nespresso machine in the morning. He was heading off to Finke to ride so of course while we were there we cheered him on. Go Mike – bike number 847! 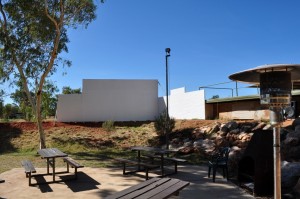 From there it was 200k to the next station, and a further 200k to the one after that. We decided to do the full 400k and again were greeted with a fabulous camping spot. Gem Tree was completely different to Tobermorey. The camping spots were on dirt, but surrounded by shrubs and trees, each with a fire pit. But we didn’t light it that night – we went down to Kate’s Camp Kitchen for baked potatoes, paddy melon bowls and the rugby league on the big screen outdoors by the fire.

Heading down Binns Track we stayed at Ross River. The camping was the most expensive of the trip so far ($18/person/night), but the homestead had a beautiful fire, with a bar menu available all day. Of course after setting up our campsite we went back to the homestead and sat by the fire with a glass of champagne while I caught up on some writing and downloading photos. Then we were taken on a tour around the station, to places in the East Macs most people don’t get to visit as they’re on private land. 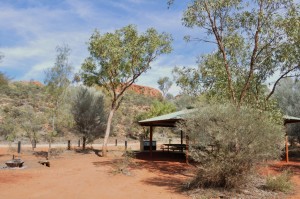 Trephina Gorge was back to bush camping, but in a national park with showers, toilets and barbecues available. Surrounded by the red and purple cliffs of the MacDonnells it’s a beautiful and very peaceful spot. We even saw kangaroo poo there – the only sign of wildlife we’d seen anywhere, except for feral cats! Oh, and the dingos at Ross River.

With few exceptions, everywhere we’ve been the camping has been beautiful, and the people have been very friendly often going out of their way to give us a hand. We’ve been bogged, had car trouble, even got lost, and always somebody has come to our rescue.

I love the outback! 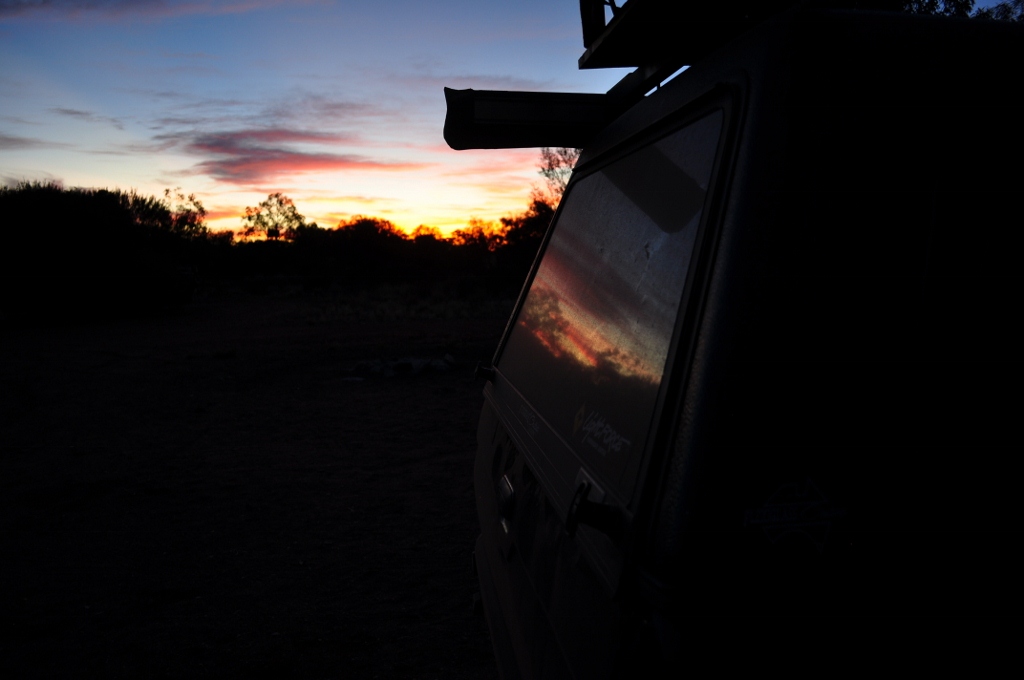 Permanent link to this article: https://kathswinbourne.com.au/camping-spots-i-have-known-2/