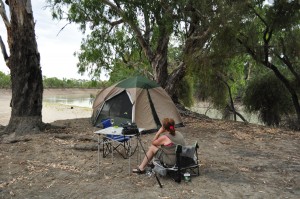 Part 3, and the final instalment, in my favourite camping places. And none of these are in Queensland.

I know a lot of people think of “Outback Australia” as the Northern Territory, but it extends across all states (except Tasmania). While I’m still trying to get to South Australian and Western Australia, I can promise you that NSW also has some amazing outback places to visit.

As the previous six spots were all in Queensland I thought I’d better make sure I included other places in this list. This isn’t some sort of quota system – it’s just that once I start looking through all my photos and writing about a place (like Cape York), I find it hard to move on to somewhere else. And there are many, many, other beautiful places around, so I had to make a conscious effort to look at some of the other places I’ve been to.

The first one on this list was easy to pick, it’s still one of my favourite places of all time. But the other two were difficult. So many to choose from, and I wanted to keep it down to three. 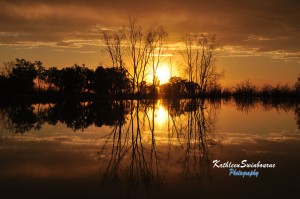 Kinchega National Park is beautiful, as is Menindee Lake, especially at sunset. But there is something magical about the Darling River. I love it at every place I’ve seen it. Bourke, Wilcannia where I saw a big flock of red-tailed black cockatoos, and especially at Menindee.

We camped right beside the river, with our own private beach in front of the tent. After setting up we went for a swim, and my companion threw in a line and caught her own dinner. While we were sitting by the tent with a glass of wine in the late afternoon (no campfire this time, it was summer) a mob of kangaroos came down to our beach for a drink from the river. They hopped up and down, and around the beach, playing, relaxing and drinking, some with joeys in the pouch. They didn’t even scatter when a big pig came down for a drink as well.

Then, a short drive to the lake showed an amazing sunset.

When I walked out of the tent early the next morning there were 3 fox cubs playing on the beach. They stopped, looked at me, and went back to their playing. 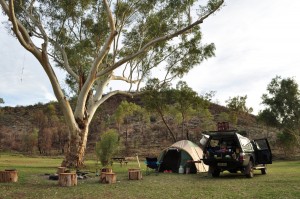 The only place on the list that is a “proper” campsite.

We camped at Ross River Station in the East Macdonnell Ranges in what I thought would be the height of the season (early June), yet we had the place to ourselves. The backdrop of the ranges was magnificent, the service at the homestead superb, and we got a private tour of the outlying regions of the station that you normally can’t go to.

A big fire had gone through the area months before and the scars still showed. Yet the land was recovering. My only problem was that I didn’t have a 4WD vehicle, so couldn’t continue down the track to N’Dhala Gorge.

But the sunset was magnificent. As were the campfires. 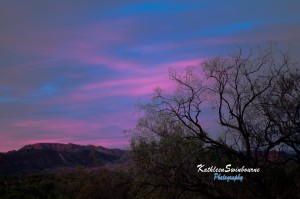 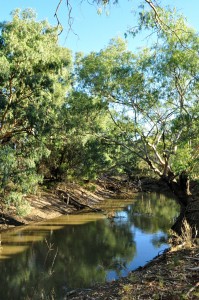 This list wouldn’t be complete without the first place I camped out without Doc. And boy did it show!

First of all we set the tent up on an ants’ nest. Then we tried fishing and tangled the line so completely we had to cut it, that is after I got it caught in a tree on the other side of the river. And to top it all off I was woken in the middle of the night by a blood curdling scream from a mass murderer, or at least from one of their victims.

It was fabulous!! It proved that I really could do it without Doc, even if there were a few hitches!