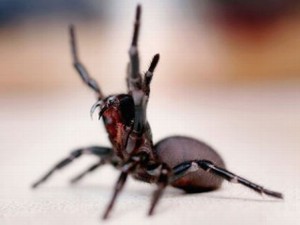 Australia has 20 of the top 25 most venomous snakes in the world, as well as 3 of the top 7 deadliest spiders (Sydney Funnelweb, Mouse Spider and Redback). Then there are Great White Sharks, crocodiles, box jelly fish, irakandji, blue ringed-octopus (or should that be octopi?)

But you knew that, didn’t you.

Did you know that even some of our mosquitos can make you very sick? They carry Ross River Fever – not deadly like malaria, but not nice all the same.

In fact I think Australia has more deadly animals than any other country in the world.

But you know what? I’ve never had an encounter. Not once, not with any of them (well, apart from crocodiles when I’ve been out looking for them). 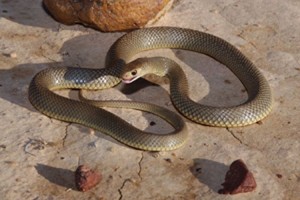 People I’ve been with have – out camping by the Darling River at Menindee Helen was sitting by our tent when an eastern brown snake (number 2 on the list) slithered into the campsite, and the one time Doc went to the farm without me he found one (eastern brown) in the bathroom. Or so they tell me. But both times the snake did all it could to disappear again when it realised there were people around.

Apart from 18 months backpacking around south-east Asia I’ve lived in Australia all my life.

I’ve had backyard swimming pools (funnelwebs like to hang out under the overhang of swimming pools apparently), and when I was a kid we had an outdoor dunny (remember that song?)

And now I’m here in hospital, a sad and sorry sight

Thanks to that redback spider on the toilet seat last night 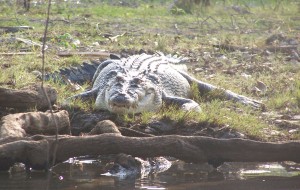 I even lived in the middle of bushland a couple of times and wandered around in thongs (for all you non-Australians black rubber thongs really are not sexy), with absolutely no regard for (or understanding of) what might have been lurking.

I swim at the beach all summer, and sometimes in winter, and have never seen a shark. I’ve been there when the shark alarm has gone off and everybody has had to get out of the water, but nobody was attacked any time.

Despite their prevalence in Sydney, I don’t know anybody who’s even seen, let alone been bitten by, a funnelweb spider, and since the advent of indoor toilets encounters with redbacks are much less common.

So if you’re thinking of visiting Australia, don’t be put off by our dangerous wildlife. 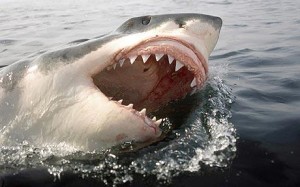 There is an average of 1 fatal shark attack a year, out of the many hundreds of thousands (or millions) of people who swim at the beaches. Snake bite deaths are around the same, and nobody has been killed by a spider in Australia since 1979.

If you follow basic safety rules then the likelihood of you being killed by a crocodile is very slim (less than 1 death per year), and there have been only 3 deaths from blue ringed octopus stings in the last century. 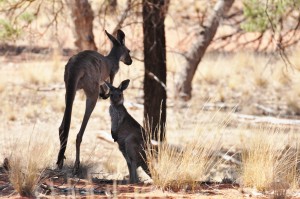 One the other hand the things I have seen while outback are kangaroos coming in to drink at lonely water troughs – with joeys in their pouches, emu dads looking after a brood of chicks, lone wombats wandering around checking out their territory, people walking straight past a rock wallaby because it was high up at Ormiston Gorge in the West MacDonnell Ranges in the Northern Territory and they were watching the path, a koala wandering across the carpark at Noosa Main Beach, a mob of roos coming in to our private beach at the Darling River for a drink at sunset, echnidnas burrowing into the ground when you get too close thinking, like small children, if they can’t see you then you can’t see them either.

Australia really is a marvellous country. When it comes to deadly animals, like my mother always used to say “they’re more scared of you than you are of them”.