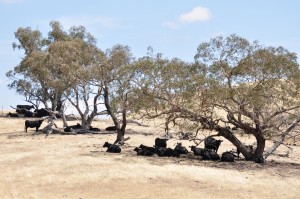 How much do we really know about cows?

Sure, they hang out in groups and follow the leader, but then again, so do the Mafia.

We tend to think of cows as placid creatures, lying around in the shade of trees paddocks, looking out with those soulful eyes and lowing softly.

Ha! Have you ever heard a herd of cows mooing outside your bedroom window at 5.30am? It makes screaming babies positively musical! 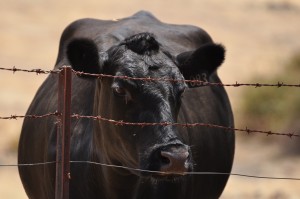 And placid? Around 22 people are killed by cows each year in the US. That makes them more dangerous than sharks. Believe me, you don’t want to get too near a cow when she’s caring for a calf. They are VERY protective – and not just of their own calves. They seem to have the “it takes a village” philosophy ingrained.

At 500kg or more, an adult cow can do a lot of damage if it charges you. And if you get trampled by a stampeding herd, you’re a goner.

In case you haven’t guessed by now, I have a herd of cows in the paddock next to the house.

This is nothing unusual, there are often cows in that paddock, and often, particularly of a morning, they are right up near the house.  Casing the joint I’ve now discovered. 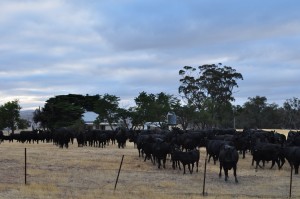 I went up the hill behind the house to watch the sunrise this morning. It was a bit of a waste of time because it was just too cloudy, but I went anyway, just in case. It was just as well I did, because when I got up there I saw the cows ambling across the paddock heading towards the house. Looking very peaceful and picturesque.

But then they started galloping.  And they kept galloping until they were all in a big bunch by the fence, right next to my bedroom, mooing loudly. The Teamsters couldn’t have organised a better display of solidarity! 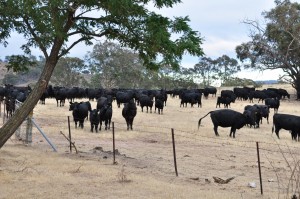 So I wandered down the hill again. It was freezing up there and I needed coffee to warm up. And that’s when everything turned really strange.

I put my camera away and walked out again. And there they were. They’d moved over to the house and were all standing in a group, staring. Silently. Not a moo. 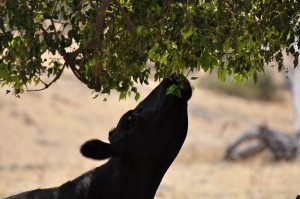 I should have suspected something when that one cow thought it she was a giraffe yesterday. But no, I just thought it was cute and took photos. I still didn’t suspect anything when she eyeballed me, then went back to the other cows for a ‘discussion’.

But now I know, this is the beginning of a Hitchcock movie.