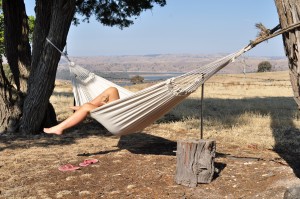 Don’t tell Doc, but I had an accident, and no, it wasn’t the cows, though it’s stupid enough to be part of a ‘cow curse’. I fell out of my hammock.

OK, ok, stop laughing and pick yourself up. It’s not that funny – or at least it wouldn’t be if I didn’t catch it on film.

I’d had a very lazy day, not even going out for a ride on the quad. I sat around reading, enjoying the peace and serenity. Moving from the veranda, to the hammock, to the back room chasing the sun or shade as appropriate for the time of day. All the while keeping an eye on the cows in the next paddock. 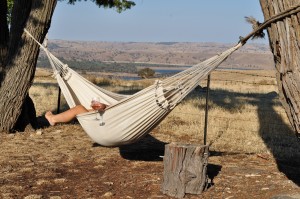 Towards late afternoon I thought I’d better do something. I didn’t feel like going out anywhere so I thought I’d take a new photo for my blog, this time of me sitting in my hammock rather than just the hammock on its own. I had the sun shining at the right angle, I got out the props (a glass of wine), set up the camera, put it on self timer, and then got into the hammock for the photo.

Yes, I was taking a selfie!

Once the camera clicked I got out of the hammock and checked the photo. Not quite what I wanted, so I did it all over again.

Set up the camera, check the focus and shadows, push the button and quickly jump into the hammock again, with one leg and a glass of wine hanging over the side. Click. Check again – not quite right. Try again. 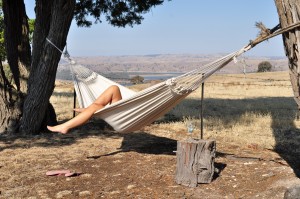 It’s a tedious process. I have 20 seconds from the time I push the button till the camera takes the photo. That’s barely enough time to get into the hammock, let alone position myself like a model. Nor do I have a ‘director’ telling me where or how to move. It’s not until the shot is taken and I get out and have a look that I have any idea what it looks like.

After the fourth attempt I dropped the wine and smashed the glass against a log. And I hadn’t even had a sip yet! So I picked up all the pieces, poured another glass and started the process again.

I took another half dozen shots, this time putting the wine down before I heaved myself out of the hammock. Good idea – I not only saved the wine glass but there were no spills.

Still none of the photos were quite right, but the sun was sinking so I decided to try just one more. I went through the process again – make the sure the camera is set right, check focus and shadows, click, and quickly back into the hammock. This time as I was getting into the hammock and gust of wind blew up and pushed it underneath me. Instead of sitting in the hammock I went right over it and fell flat on my arse on the ground on the other side. 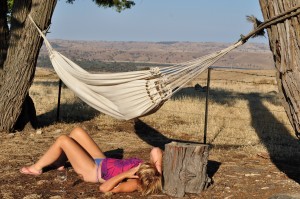 I lay there as the camera captured my loss of dignity. That was bad enough, but banging the back of my head on the log by the hammock was the bigger problem. It hurt, and I started wondering whether I’d given myself concussion.

I checked my vision, felt the back of my head (the lump was growing bigger by the second), and decided I hadn’t been knocked out so all was OK. Not a sufficient check I know, but probably more than they do for footballers when they want to send them back on the field. But then I realized there was a bigger calamity than a possible concussion – I’d spilled my wine. The second glass gone and I hadn’t had a drop! Yes, I’d fallen out of my hammock while completely sober!!