It was one year ago today that I posted the first picture of my new garden.

What a difference a year makes!

I love my garden and have spent quite a bit of time in it.  It’s the first garden that I think of as truly mine. Having rented for most of my life, my garden has always been made up of pot plants so that I can move it with me.

I did do a bit of gardening when we lived in my grandmother’s house when my kids were small, but that was always her garden. I just did the work in it!

So this one is mine. I dug up the grass that used to be there, moved all the rocks for the border, and put in all the plants. And I do all the weeding.

Obviously I’ve added to the garden, but so far nothing has died. I’ve pulled a couple of plants out (nothing in that photo), but only because they’ve done too well and have encroached on other plants. 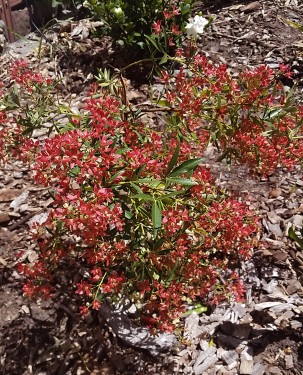 The Christmas Bush (left side of the original) was beautifully red this year, but was still too small to pick a bunch for my christmas table.

That pink plant in the middle front of the original picture is a hummingbird mint. And yes, that big pink thing in the latest photo is how it looks now. Doc wanted to pull it out in winter because, according to him, it wasn’t doing very well. I think he was wrong! Whenever I work around it I get that fabulous mint smell, and the buzz of 000s of bees. 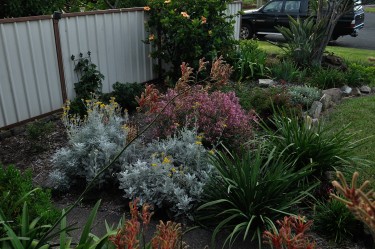 The plant in the foreground with silver leaves and yellow flowers is Doc’s favourite plant, but I have no idea what it’s called. We bought 2 when they were tiny (about 8cm high) and he promised me that they don’t grow very large. Hahahaha! But I suppose he made a pond for me, so I can put up with his favourite plants The pond was so simple – two plastic plant pot bottoms, a fire hydrant garden decoration and a solar pump, and VOILA! Easy,. It cost less than $30 all up and I can sit in my office or on the front verandah and hear the water splashing. As long as the sun is shining. 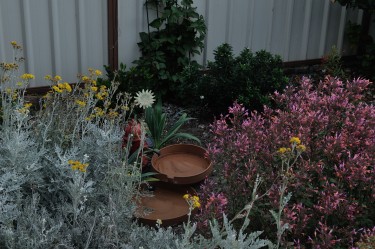 It’s even nourished us. A tomato plant that grew all by itself gave us cherry tomatoes for about 4 months and only got pulled out this week. I had 2 red lettuces, again that grew up from nothing. And I planted a blueberry bush and a loganberry.

Of an afternoon the sun sets over the escarpment just visible in the top picture, and it’s a beautiful place to sit with a cocktail or a glass of wine, drinking in the beauty.

I even planted a rose garden out the front too, along the front of the house outside the green room. 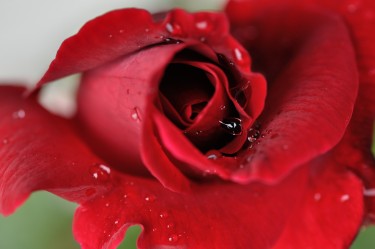