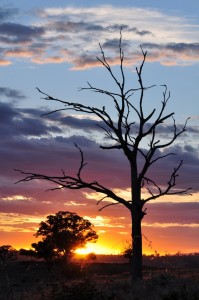 Days go so slowly when you get up before sunrise.

After going to bed before dark, unsurprisingly I was up this morning to watch the sunrise, and a beautiful one it was too. The countryside with its open spaces and trees makes for great scenery. Dead gum trees with branches reaching for the sky make the perfect silhouette against the backdrop of the gold, orange and purple sunrise.

Even Doc got up early. Well, around 8am, but that’s early for him, especially out on the farm. Doc likes to sleep in whenever he can. And I like him to sleep in – he’s definitely not a morning person!

But there’s always something to do out on the farm, and having only one full day this time meant we had less time to do it, so we had to get under way. 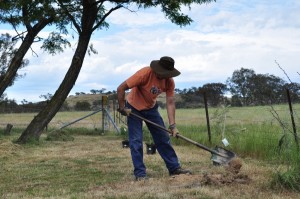 First up planting.  Some of the old trees around the perimeter of the yard have died off and/or fallen over. A couple we had to cut down before they fell over onto the house, so we’re doing some replacement planting. A nice hedge will serve as a windbreak, as well as making the yard more attractive. This trip we brought 3 grevilleas and a hibiscus. Hopefully the hibiscus will settle in before the frosts next winter. We moved the pots around by the fence a bit while we worked out exactly where we wanted them to go. This was a lot more complicated than it sounds – we had to see how big they all grow, what colours we want together, how close to the fence, what other plants are we going to get, etc. Once this complicated decision was made Doc dug the holes and I put the shrubs in. Job 1 done. 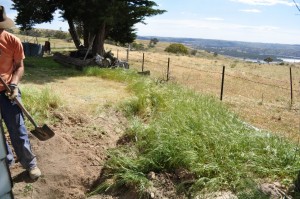 Then it was on to the toilet. When he built the shed Doc also laid the pipes for a toilet, but didn’t install it. Originally he was going to put it in the corner of the shed, but has now decided to built it separately outside. Once finished it will be the toilet with the best view in Australia. Between our last trip and this one, a wombat got into the trench and in digging his hole covered up the end of the pipe. That had to be found and dug out again, and the whole area evened out and smoothed over for a slab of concrete to be laid. Including filling in the wombat hole – I just hope he wasn’t in it! Job number 2.

While Doc was doing this I did some writing and editing of my sunrise photos. By then I was getting hungry and I started thinking about lunch. Surely it was later than 11am?!?! 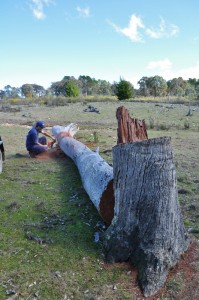 Job number 3, we (and I’m using the royal “we” here, I really mean Doc) had to get firewood. A few trips ago Doc cut down a very tall, dead, gum tree and he’s been progressively cutting it up and taking the wood home since. This trip we finally got the last of it, so now we’ve got enough firewood to do us well into next winter.

While Doc was cutting I went for a walk down to the creek. The wattle is now all gone, and despite the recent rains the creek is almost dry. The small waterfalls from our last trip have gone completely, but the deep waterhole still has water and I disturbed a kangaroo drinking there when I walked up. I’m not sure who was most scared – him or me as he jumped away through the scrub. 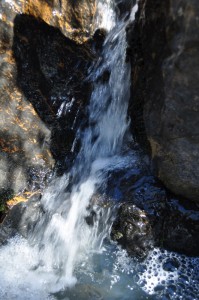 While it probably sounds like Doc does all the physical work around the place and I just wander around taking photos, that’s not true. I also write and I do all the cooking! Not that we have a gendered division of labour or anything, but … Well, yes, we do have a gendered division of labour.  Doc’s a bloke and he likes doing all the bloke things, particularly out in the country. So I let him. I’m not stupid – if he wants to chop and dig and mow and cut and all that other stuff who am I to stop him??

One thing we do together is sit down in the afternoon and relax with a drink. It makes all the work during the day worthwhile, especially when the kangaroos jump by through the next paddock, and the birds flit in and out of the blackberries. Life really is good. 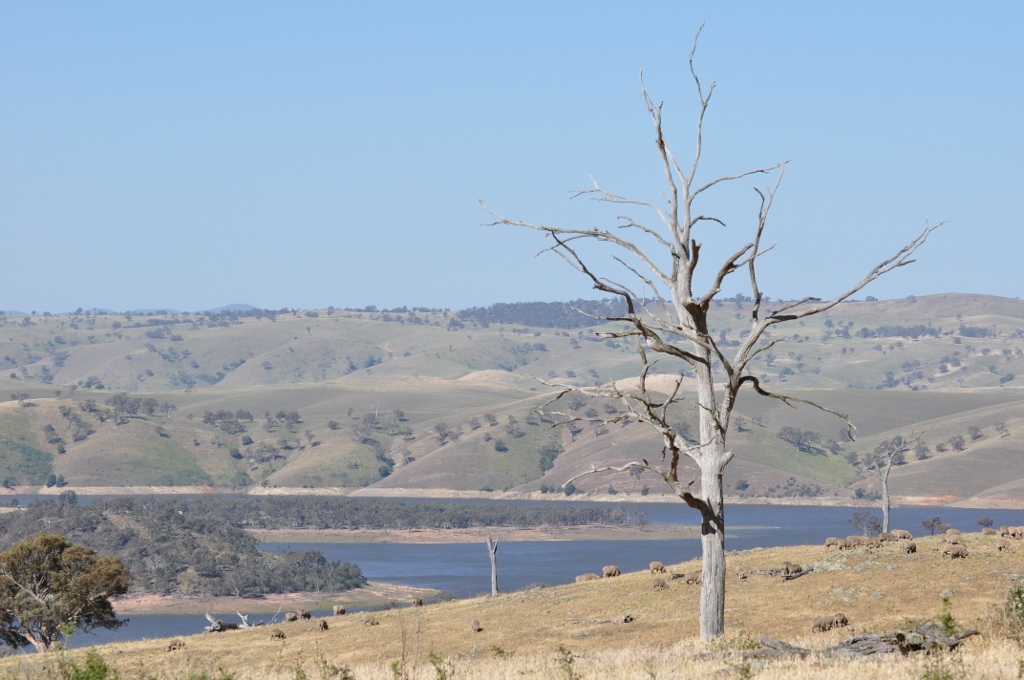