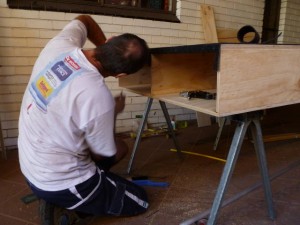 I know it’s nearly time to leave because things are starting to go wrong.

Perhaps it’s because Doc’s such a perfectionist, nothing can be left to chance. The more he does, the more he finds to do.

He keeps asking me how I want to pack things into the car (how should I know, I haven’t done it yet!), and how I want to tie things down (umm?), exactly what I’m taking (not yet sorted). As I haven’t sorted it yet, he’s been stressing for me.

He built drawers for the back of the ute. But of course, then he found that the spare water and fuel containers didn’t fit in easily so he made a safe place to store them. Then there was the gas bottle, even though it got tied in it wasn’t safe enough for him, so he made a stand that it slots neatly into.

He has spent many, many hours running wires under and through the car for the second battery, lights that he put in the back and the inverter. 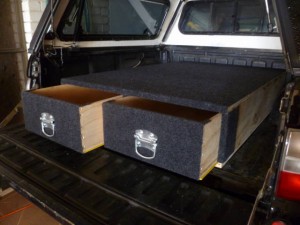 And now the inverter has blown. Of course, the new one we need has to be posted from Brisbane and they won’t express post it – even if we pay. So Doc has been ringing around madly trying to borrow an inverter, and the new one will be shipped to a friend in Alice Springs for me to pick it up there. Let’s just hope I can install it ok!!!

But not everything goes into the back of the ute. Doc made a stand to replace the back seat. It has a space for the fridge, with separate boxes for the ecopot, my camera bag and other bits & pieces.  The inverter and fire extinguisher are in place on top of the ecopot box.

Last night he thought he’d better show me how to get the spare wheel down from underneath the car. A necessary skill to have! That’s when he discovered the jack doesn’t fit into the hole to wind the wheel down (you’d probably understand if you had a ute), and the wheel jack doesn’t fit the wheel nuts. All I can say is it’s lucky I didn’t blow a tire last time I was outback!!!

He’s installed roof racks, and bolted the awning on one side of them, and shovel holders on the other. He’s even made a special spot for the milk crate (more on that later in our trip). Last night he decided the roof racks were too long, because if the car was on an angle I might hit my head on them. I’d say it serves me right if I did, but Doc cut them for me so now if the car is at enough of an angle for me to hit my head on the roof racks I’m really in trouble!

I’ve set aside most of this week to sort all my clothes (we’ll be in the cold of the desert and the warmth of tropical Queensland), make sure all batteries and other technical equipment is charged, and sort all the cooking and camping equipment. And I discovered that I left my favourite tripod behind at a previous job. Fortunately they will express post it to me, but it hasn’t arrived yet. I’m depending on you Australia Post because my other tripod has a missing screw and it’s difficult to get a replacement.

And now I’m crying while listening to country music that I’m putting onto my ipod. And I haven’t even had a drink! I love country music and you can’t travel outback without it.  I’m giving myself an hour to get the music sorted out, then I really do have to move onto other things.

(Disclaimer: I didn’t download this video for my ipod, but I do have the song on there!)