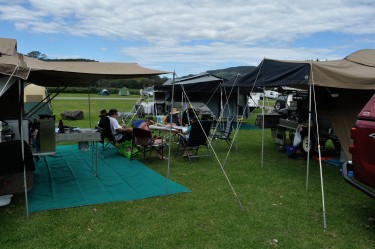 “I miss being able to squat behind a behind a bush.”

That’s a phrase I certainly never thought I’d say, but somehow on the weekend it popped out of my mouth.

Yes, we went camping. And it was a different experience.

We were going to meet up with three couples who are planning on going to Cape York later this year. They’d all added to or changed their travelling set ups, including one couple buying a new camper trailer, and wanted to try them out. This would be their first chance to check what worked and what didn’t to start refining what they were talking away. 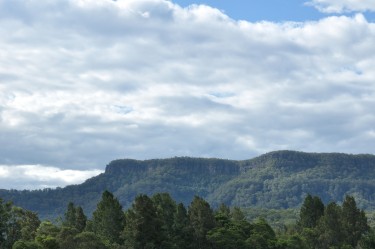 Any chance to talk to someone about Cape York, and maybe get talked into going as well, makes Doc happy, and I just wanted to throw the swag out. Doc did suggest that given the weather we’d been having it might be better to take the roof top tent, but I’ve been wanting to get out in the swag for ages.

So we threw the swag in the back of the Cruiser and off we went.

One of the best things about living in Australia is that you don’t have to go very far to really feel like you’re miles from anywhere. We were headed to Bendeela near Kangaroo Valley, just over an hour from home (around 2 hours from eastern Sydney), including a drive along some beautiful country roads surrounded by gum trees. Being used to camping out in the middle of nowhere while we’re travelling, it came as a surprise when we drove down the hill and the gum trees opened out into a large grassed area dotted with caravans, campers, tents, and vans. Actually, they weren’t so much dotted throughout, as clustered down one end – the end with the toilet block. “Why would anyone do this?” I thought to myself “There’s too many people for this to be peaceful.” 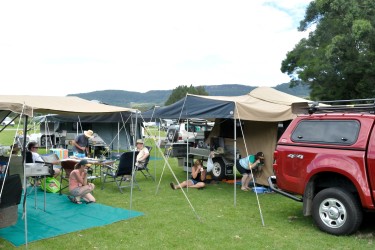 How wrong could I be?

We easily found our friends, who had set up with some space between them and the cluster near the toilets. We pulled up next to them, grabbed our chairs from the car, sat down, and took in the tranquility. Trees all around, the Kangaroo River gently flowing down one side and a mountain on the other.

It wasn’t long before a wombat wandered into our campsite. Sadly it was very mangy, as they tend to be if they’re out during the day, but we all still got down and snapped away, papparazzi style. After all, it’s not every day a wombat wanders close enough for you to touch it. 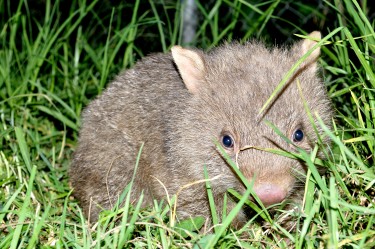 Happily, the wombats that wandered into our campsite that evening were healthy, though the baby looked like she should still be with her mother. One particular wombat kept Doc awake as it came up and sniffed the swag, and stumbled over the ropes as it wandered around.

There were also kangaroos that came in to feed on the grassland next to the camping area, and the meandering river was a perfect place to swim or paddle in the kayak, or fish for your dinner. It was very peaceful.

Being in a protected water catchment area there were no powered boats allowed on the river so no motor boats spoiling the quiet or making waves, and no pets either. I know this will probably out me as an animal hater and horrible person, but I hate having dogs around everywhere while I’m out camping. I’m sure you personally look after your dogs properly, pick up their poo & don’t let them bark or run around and annoy anybody else, but not everybody does. 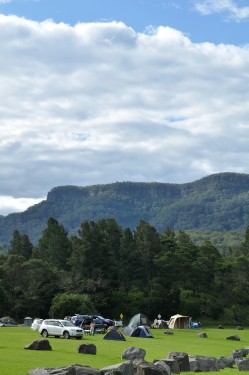 More people arrived as the afternoon wore on, yet despite there being quite a few people it didn’t feel crowded (and in fact was nowhere near full), nor was it noisy. At least not until the bloke in the combi van next to us decided to show off his new sound system with the mega sub-woofer. But even that didn’t last long. There were kids out playing in the water, or on their bikes, yet nobody was screaming.

My biggest disappointment was that we had to set the swag up under the awning because it did rain during the night. At least that meant we could leave the flap open to see out, and when I woke up once during the night the sky was full of stars.

That was when I realised why so many people were clustered around the toilet block. If you wake up in the middle of the night you don’t want to have to walk too far to go to the toilet. Hence my use of the phrase “I miss being able to squat behind a bush”.

And the next morning when I found I’d forgotten to pack the ground coffee it was only a short drive into the cafes of Kangaroo Valley before we headed out to find some 4WDing tracks.