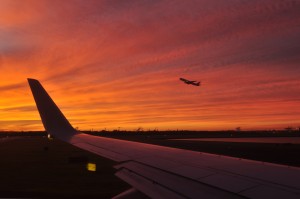 I used to love flying. It meant that I was going away somewhere and I love to travel. I also love that feeling of being up above the earth, above the clouds, just …. well, flying.

But I hate the reality of sitting in a small, enclosed space, barely able to move for hours on end. 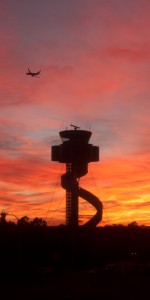 And airports just aren’t what they used to be (back in my day…). There’s too much time spent in queues . Waiting to check in yourself and then your bag is bad enough, but the security checks are seemingly endless. I once got to the airport 45 minutes before a flight and nearly missed it because of queues.

Since meeting Doc most of our travel is done by 4WD through Australia, and I’m much happier.

So now I figure if I have to get up before the crack of dawn for an early morning flight there’d better be an upside.

So here it is, in all its glory. Sunrise over Sydney airport. Some of the photos are a bit blurred, but I was taking them from a moving plane!