I never used to go camping. Too cold, too many insects, too uncomfortable. Then Doc dragged me kicking and screaming into the outback in a swag, and I was hooked.

All my objections were overcome. Modern camping is comfortable, campfires help with the cold, or you can just go north where it’s never cold, and there are even good products that will keep mosquitos away.

And all those stars!

One thing that is still true though, is that there are many, many things in the Australian outback that will kill you!

If you think spiders and snakes are scary, wait until you come up against things you never see. 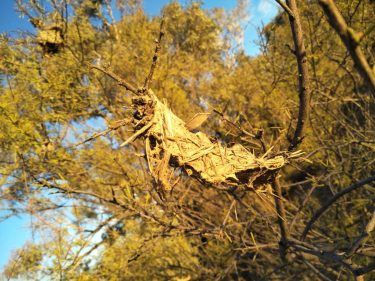 First of all, there was the night of a million spiders at Kati Thanda. All alone, miles from anywhere, and surrounded by a million spiders. All just watching me. And in a twist on all the horror movies you’ve ever seen, these were tiny. Little sand spiders. I’m sure that individually they were harmless, but the sheer number of them was enough to give an arachnophobe nightmares. They were like the weeping angels – they moved when you weren’t looking. But you couldn’t look at them all at once to keep them away.

After that were the things that build their nests in trees. And I don’t mean birds. Back on the Oodnadatta Track I set up camp at Kathleen Creek (how could I not?). It was beautiful. I found a spot under the gum trees beside the creek and collected some wood for a campfire. I was the only one around.

It was while I was sitting there admiring the sunset that I noticed the clumps in the trees. Obviously I didn’t learn at Kati Thanda because I went and investigated more closely. I shouldn’t have. I don’t know what builds huge cocoons in trees, and I don’t want to know.

I wasn’t even tempted to shine the torch around at night to see if anything emerged.

At the Lambert Centre, the geographical centre of Australia, there were things that build even bigger nests in trees and combine them with spider web. Along with something that ‘left its spoor’ beside my head while I was sleeping. I hate to think what else they did around my swag.

Then there are things that dig holes in the ground. Big holes, small holes, lots of holes. They are everywhere. Some camouflaged, some right out in the open. At least things in trees might stay in the trees. Things on the ground are on the same level as me!

One night in the Simpson Desert the things that dig holes in the ground sounded like they were having a party next to my swag. There was shuffling, digging, rummaging, pulling of leaves and branches. It’s rather disconcerting to have that much noise so close to you. In the dark. When you’re all alone. When all you can do is lie there and listen to it.

When I got up in the morning there was a freshly dug hole right by my swag.

I don’t know if I’m completely unaware of my surroundings when I set up my swag, or if the things that dig holes in the ground are somehow attracted to me in the night. Or if there are just millions of them everywhere!

And that’s without mentioning the things that build big mounds and dig holes in them.

But don’t let it put you off. Camping really is fun!