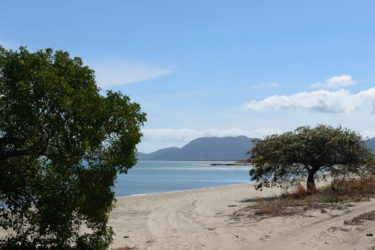 There is little more disconcerting in life than waking up, climbing out of your tent for your early morning pee, and being greeted by a round of applause. When you’re all alone.

That’s what happened to me at Bathurst Bay. 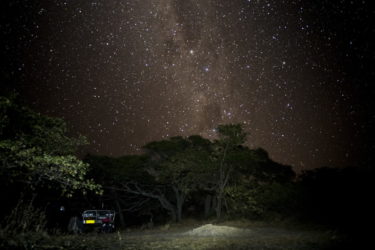 We arrived the afternoon before and drove along the beach. There was another couple camping further down the beach, so we set up far enough away from them that they wouldn’t see me crouched behind a tree (or so I thought). After all we were camping among the trees, not right out on the beach.

Unless there was somebody else wondering around that we didn’t know about.

It was early, only just getting light. I must admit that as there were only 2 of us and Doc was still in the roof top tent, I didn’t bother to hide, just squatted up the back of the campsite at the tree line. After all, I didn’t expect anybody to be watching. Let alone applauding. 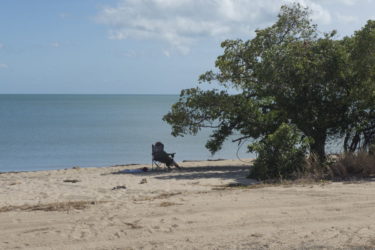 So there I was, stark naked, squatting beside the trees. As I stood up, somebody applauded. It came as quite a shock. I jumped up quickly and looked around. There was nobody in sight, but that doesn’t really mean much as I didn’t have my glasses on so I can’t really see a lot.

I said a tentative “hello”, but there was no answer. What could I do?

I bowed in the direction of the applause and climbed back into the tent to put some clothes on. 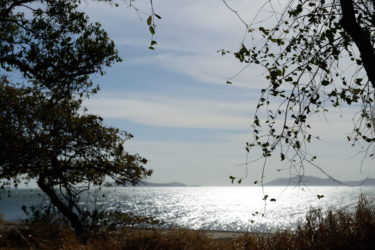 Still nobody appeared, so I made the coffee. As we were sitting there drinking it I heard the applause again. This time coming from the tree next to us. It was a bird just come in to land and the flapping of its wings sounded just like somebody clapping. Mystery solved.

With nothing that had to be done, and nowhere I had to be, I began to muse about the meaning of time. Either because tropical beaches bring out the philosopher in me, or because I wanted to start drinking champagne at breakfast time. Either way, I began to think about how we measure the passing of time. 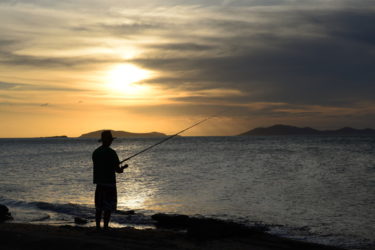 With nowhere to be, and no internet or mobile phone service time becomes measured only by what you need in the moment “I think I’ll get out of bed now”, “I’m hungry, I’ll eat”, “It’s too hot, I’ll just lie in the shade and read”, “It’s getting dark I’ll light a fire”, “the tides running, I’ll throw in a line”, and of course “I want a glass of champagne”.

That’s just the day to day. Seasons up here are different too. There’s the seasons when the fish are plentiful, and those when they’re not around to be caught (or perhaps that a skill level thing).

And there’s the passing of the crocodiles. We knew there was a crocodile in Bathurst Bay. We saw it last time we were here, and we saw it again this time. Only this time it was swimming south past our campsite first thing in the morning. Just off shore. So close that it wouldn’t even have to alter its direction to eat you if you were in the water.

The only question was, as the croc had gone south, did that mean it was safe to swim until it came back in the afternoon?

I think I’ll pour a glass of champagne and think about that one. It is tempting ….