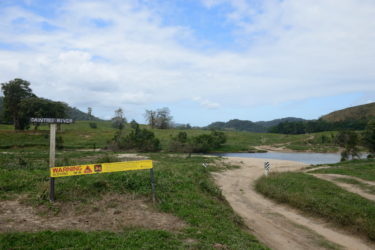 It was with some excitement, and more than a bit of trepidation, that we left Cairns and headed toward Daintree Village and the start of the Creb Track. And the official start of our holiday.

We didn’t drive along the Creb last time we were up here because it was closed. It’s closed more often then it’s open because it’s steep and clay based. The slightest bit of rain and the track becomes impassable because it turns into heavy, sticky, slippery mud. It’s just as well we were late leaving this year because the track had only been open for a week when we got here. 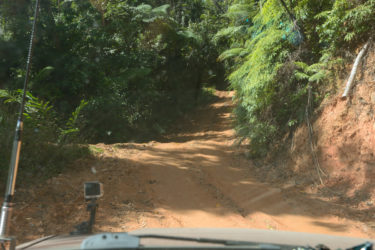 The track itself is only about 60k long, but that 60k can take you 4 hours or more. It’s very steep in places, with long ascents and descents that are easy to slide off, and a few creek crossings. And of course, that dirt that turns into slippery, sticky, clay at the slightest hint of moisture.

When Doc and I first went up to the Cape in 2011 it was my first big 4WD/camping trip away. I was more or less along for the ride, so apart from picking a few destinations, my job was mainly to watch the boys drive and take photos. Now that I have my own 4WD and have been away on a few fairly big trips by myself, I have a different view of what we should do. And that view is : drive less, stop more. 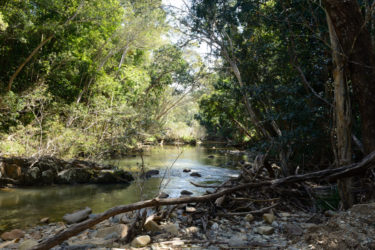 While Doc would have been happy to keep driving straight along the Creb, I insisted we stop and camp at Yindilli, which is half way along and stunningly beautiful. Besides I wanted to spend time at Kija (Roaring Meg Falls), and it was already getting close to 4pm. If we continued now it would be a quick 5 minute stop to glimpse the river. So we stopped.

Also at Yindilli is CJ Fisher, a Kuku Yalanji Elder and Buru Traditional Owner We had a chat with him when we enquired about the camping, then he came to check up on us a couple of times after we set up, and have another chat. If you’re interested he will take you on a tour of his country, show you sites of cultural significance, and tell you interesting dreamtime stories. 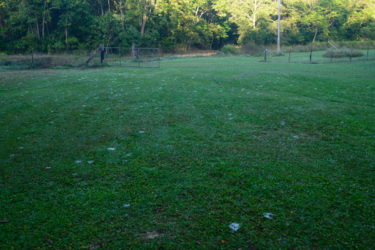 Remember my adventure with the spiders at Kati Thanda?

We had a very heavy dew overnight, so heavy I thought it was raining. As we’d gone to bed about 7pm (I’m feeling more and more “grey nomadish” all the time), by 6am I just couldn’t lie there any longer, particularly as there’s no internet access so I had nothing to read in bed. I got dressed and climbed down the ladder onto the wet grass. I turned around and noticed lots of white circles on the ground, but without my glasses on really had no idea what they were. I probably should have left my glass off, because every one of those white circles, sometimes only centimetres apart, was a spider’s web. And they covered the ground. And we had been sitting and walking amongst them since we arrived in the afternoon!

They were only visible because they were covered in dew drops, which did make them beautiful, and very photogenic. Of course I had to get out the micro lens and kneel down to get close up shots of the sun on the dew drops. They do say you are never more than 6 feet from a spider in Australia, and sometimes a lot closer.

After a leisurely breakfast we packed up and headed for Kija, only a short way along the track from Yindilli. You can also camp at Kija (enquire at CJ’s house at Yindilli), and that would also have been beautiful. Not so much grass, but fireplaces and firewood for a camp fire. And toilets. 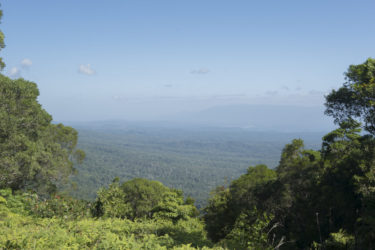 If there’s one thing I could suggest, more signage about where men shouldn’t go would be helpful.

They ask you not to take photos or video at the falls, so I didn’t. But I can tell you, the scenery is spectacular! 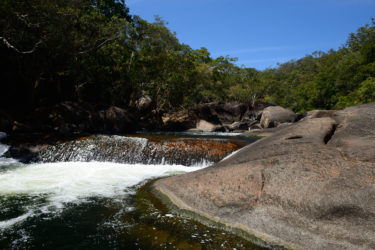 In the other direction from the falls is a swimming beach between two other small falls. Swimming! Hah! This is croc country. But it says you can swim, so we decided to have a swim. Another one for the brag book – we swam in the river on the Creb Track!

For those who follow this blog, you might remember my experience with my sister at Jim Jim Falls in Kakadu. Well, this one was similar.

We got to the beach and both looked at each other. Just because they say it’s safe to swim doesn’t mean it actually is. After all a crocodile might have been stupid enough to get washed over the waterfall and be waiting in the pool for idiots like us! 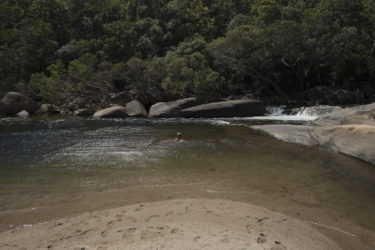 So we walked to the edge of the water and stood there, ankle deep. Because everybody knows crocodiles won’t get you if you’re in the shallows. Then we decided to walk along the rocks – the rocks in the water where the crocodiles might be. So then I told Doc to get in so I could take a photo (yes, I was prepared to sacrifice him to save myself, and for a good photo. The car keys were on the towel on the beach so I would be all right). He waded in waist deep and stood there. Because obviously the crocodiles won’t get you if you don’t dive in the water completely.

Then, and only then, did I get in the water. It was beautiful. And there were no crocs. At least no hungry ones!

Permanent link to this article: https://kathswinbourne.com.au/the-creb-track/