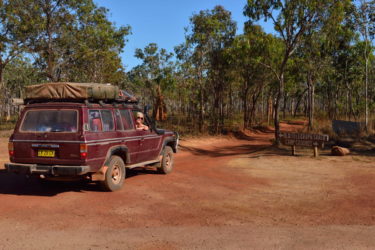 After spending almost 5 months in Adelaide on family matters, with only small weekend trips away, I felt the need to do something a bit bigger.

“I need to do something challenging” I said to Doc “Something that will push me out of my comfort zone, and even scare me.”

There’s no such thing as easing yourself into the Tele Track. It starts the way it means to go on, with the drop in to Palm Creek almost vertical. Even the chicken track is steep, soft sand. And once down it’s almost a given that you’ll have to winch out again. Unless you have lockers, which we don’t. 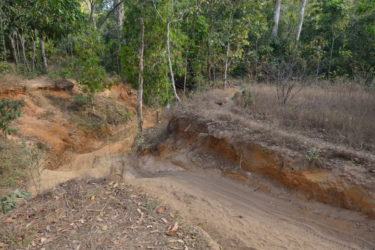 We watched 3 people do the crossing on the afternoon before we were planning to start. Every one had to winch out. Even the one with lockers.

So, as you can imagine, I was a little nervous.

We both woke up early. Doc usually sleeps in, so I think he was a little nervous as well.

And even though we were on our way far earlier than usual, when we got to Palm Creek there were 2 cars ahead of us. And another 1 stuck on the exit, having torn 2 tyres off their rims trying to get out. He had to winch out, then fix both tyres before anybody else could start the crossing.

It didn’t make me feel any better about doing it myself. 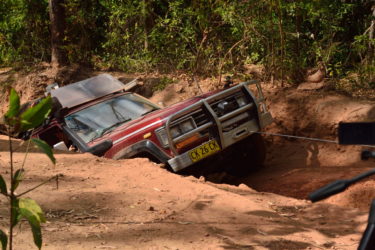 But watching the next 2 cars cross did. Being a bit of a perfectionist I was dreading not being able to get up the exit, and being the only one who had to winch, in front of an audience of blokes. Given the cars ahead of me all had to winch I felt a lot better. Though I let Doc do the winching bit. It was a difficult exit and I don’t have enough winching experience (well, none actually) to feel comfortable about doing it.

So just over one hour after arriving at Palm Creek, we were over the other side and on our way. 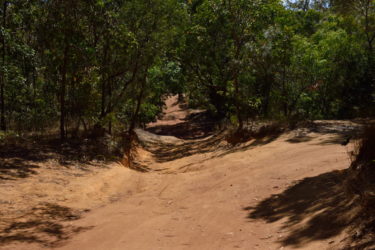 And when we came up here in 2011 the track was a lot easier than this time. I don’t know whether it’s because it was later in the season so the track was more (much more. Much, much more) rutted, or because there are so many more people driving it now. Probably a bit of both. But it was rutted, and the entries to and exits from creeks were much steeper, and rutted.

Almost immediately past Palm Creek, when I was starting to breathe a bit easier, there’s Dulcie Creek. As there’s only one entry to the Creek I was on it before I knew it. I came around a bend in soft, rutted sand, and there was a creek in front of me. With a long drive before the exit on the other side. There didn’t seem to be much choice – just do it, as they say. Just as I was letting my breath out on the other side, there was an almost vertical bank right in front of me.

Oh god. Could I really do this? 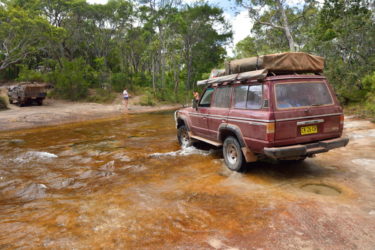 Fortunately the next two crossings were simple, though the tracks between them were the stuff of nightmares. Have I mentioned how rutted the track is? Do you have any idea how far a car can lean over before it will actually tip? Quite a way I can tell you. I swear we were at more than a 45o angle at times. Sometimes for what seemed like long times. Sometimes it would lean one way, then just as you straightened up and breathed again it would lean the other way. It almost made me wish for the relative ease of a vertical drop in to a creek!

And the ruts meant that sometimes one wheel was in the air, often while you were trying to climb in soft sand. Which makes it very difficult to gain traction, particularly without lockers. 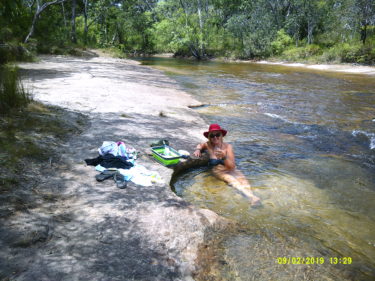 Finally we got to the beautiful Dulhunty River. The Dulhunty is a lovely place to fish and swim, with camping right beside the river. We were thinking of camping there, but there were already quite a few people set up. So we continued to Bertie Creek, where we set up camp, then sat in a rock hole in the river with a glass of wine and lunch while we watched the world go by.

And watched for crocs. I have never heard of anybody being taken by a croc on one of the crossings on the Tele Track (except the Jardine but you’re not allowed to cross there any more anyway), but you never know. It pays to be wary.

There are worse places to be, even if you do have to get through Palm Creek to be here.

Permanent link to this article: https://kathswinbourne.com.au/driving-the-old-tele-track/