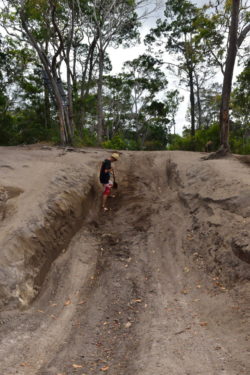 I was on such a high. Gunshot is the stuff of legend. Even the chicken track at Gunshot has a deep, long creek crossing. And the easier of the 2 exits is steep & rutted. It’s not an easy crossing however you do it.

We’d camped at Bertie Creek the night before, so it was only a short drive to Gunshot in the morning. Just long enough for me to ruminate on how difficult this might be.

Was I going to take one look at give up? How bad could it be? Last time we were up here one of our party nearly slid off the side of the entry into the creek, and that was the easy track. Could I really do this???

So of course I procrastinated over morning coffee. I was torn between wanting to get on the road and get there quickly before there was anybody else to see me fail, and wanting to wait until I saw somebody else do it first.

But despite my attempts at procrastination, we were on the road early. And we were the first to Gunshot.

And like just about every other creek crossing on the Old Tele Track, there were multiple entries to the creek, and two exits. Which way to go?

So I walked. And discussed it with Doc, and walked some more.

The most obvious entry point meant a long crossing along the creek, with one quite deep part of the creek. And a little bit of soft sand. And tree canopy meeting over the creek just about at roof top tent height. The less obvious entry point meant an almost vertical drop onto mud, but a short shallow crossing. An almost vertical entry drop a bit longer than the car, so no way to control that drop. The drop in that people put videos of onto youtube. Almost guaranteed that something will go wrong.

But, if I wanted to keep travelling up the track I had to cross Gunshot. And I was definitely not doing the vertical drop in. So I handed Doc the video camera. To say I was nervous was an understatement, but I wasn’t going to let that show. “Easy”, I said as I walked back to the car.

I sat at the top of the entry and took a deep breath. “Ease into it” I said to myself.

There was only a slight slide as I drove down the mud. Once at the bottom, it was surprisingly easy driving. As I got to the deep spot and water came up over the bonnet I felt a sense of exhilaration. “I’m doing this! Wow. I’m doing Gunshot!”  In fact I felt so good I didn’t even think about whether the car was going to fit under the tree canopy. Lucky it did.

But once through the creek there was that exit. It looked worse sitting in the car at the bottom than it had when walking up it. But, again, there was no choice but to keep going. So I did. The ruts made the car bounce first this way then that, and I didn’t make it up. So I rolled back down to try again. A few more revs, and up I went. I almost cheered as the car went over the top. Doc did cheer!

And of course, once I was out we had to sit around and watch other people do it. It is after all the stuff of legend, and you might get lucky and see somebody try to come down the vertical track. Actually, it’s a bit worse than vertical, it tucks under at the top. We got lucky! 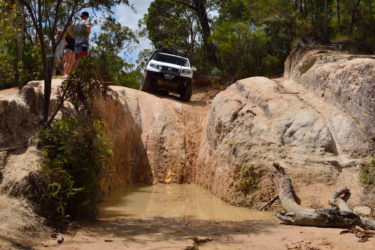 Naturally, it was a young bloke. With no fear, or no understanding of how insurance works. He walked up to it, looked, went “yeah, looks ok”, got all his recovery gear ready, and slowly went over the edge. He was very controlled, he inched his way over, very slowly, very controlled. Then he got to the point where gravity just takes over, and he landed with a thud. Straight down.

And got rescued by a Hyundai Terracan driven by a Swiss tourist. Seriously. (video link to come)

This Swiss couple have been on the road for 18 months. We met them on the Tele Track, and kept meeting up with them at different crossings, camped next to them a Nolans, then ran into them again camping at the Tip. They are fascinating. They’ve driven through Russia, Georgia, Iran, Kazakhstan, Mongolia, and other countries. Now they’re in Australia travelling around in “Terry”, their Hyundai Terracan. Check out their travels at terryontour.ch or on facebook ‘Terry on Tour’. If you see them driving around say hello from me.

But back to the Tele Track.

At Cockatoo Creek we were greeted on the other side of the creek by a group of people on a tag-along tour of the Cape. They’d come in from the top of the southern section of the Tele Track and were camping at Cockatoo Creek to watch the action. It’s a rocky crossing, with some deep holes that you have to try to avoid. While not quite Gunshot, people still do pick the wrong line and get stuck in some of those holes.

The best way to avoid the holes is to have somebody directing you around them. Doc did the honours for me, though I think he was watching where he was walking more than where I was driving. Not always successfully.

But with all the people already camping there, that meant another full campsite. As there was only one more creek to do on the southern part of the track we continued, and set up camp just into the northern section right near Fruit Bat Falls so we could go in for a swim in the morning. 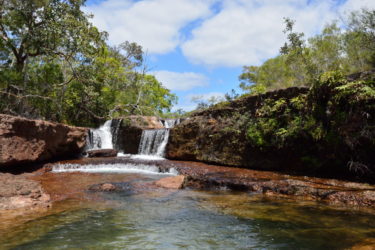 Fruitbat and Eliot/Twin Falls have to be two of the most beautiful spots on the Old Tele Track, and easily accessible from the junction even for those who don’t want to drive the Track itself. Just onto the northern section of the Track, they are stunning. Beautiful clear water, and safe to swim in. At 8.45am we had Fruit Bat Falls to ourselves for an hour before anybody else came down.

Eliot/Twin Falls was busier, but not overly. You can set up camp there and families with little kids will often camp there for a couple of days so the kids can swim and the parents don’t always have to be on high crocodile alert. Though I still managed to get a time when I could photograph the falls with nobody swimming in there.

This is a place that has to be seen to be believed. The photos do not do it justice. 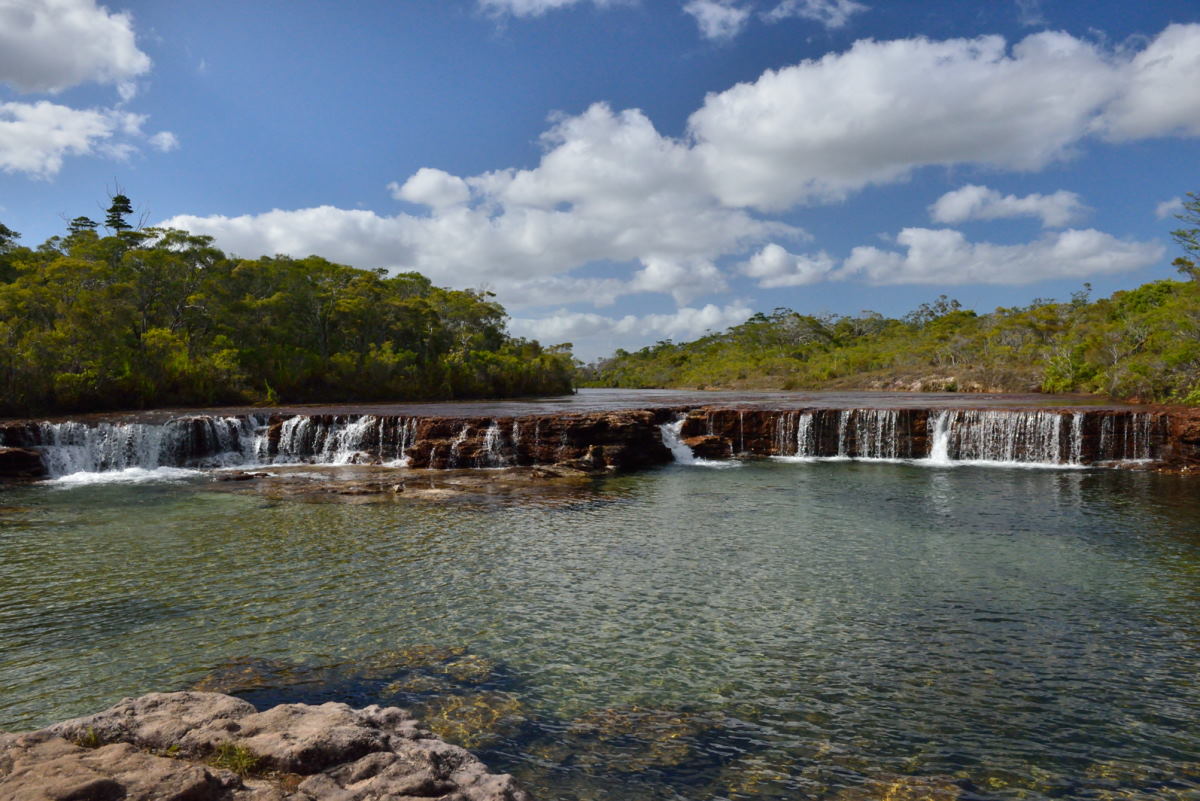 Permanent link to this article: https://kathswinbourne.com.au/gunshot-driving-the-old-tele-track/