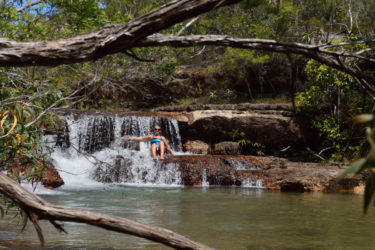 I did Gunshot! I was still on a high when I woke up the next morning.

But it didn’t take long before I came down to earth with a thud. Gunshot is definitely not the hardest creek crossing on the Old Tele Track.

After a morning spent relaxing at Fruit Bat Falls and Eliot/Twin Falls I felt ready to take on anything. It’s lucky I didn’t know what ‘anything’ meant. The further north we went the more difficult the crossings became. Particularly without lockers! (Is anybody noticing a pattern here? The next car will definitely have lockers.) 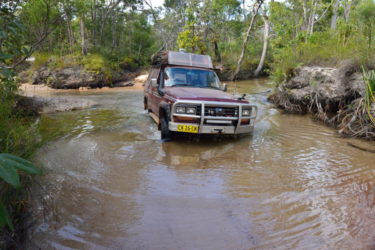 On the northern section of the Track there’s a lot more stopping and walking the creeks to work out the best entry & exit points, and the best way to drive across. Creek crossings aren’t always straight, or straightforward. At Bertie Creek for example you need to drive alongside the creek for about 20m before you come to a place where you can cross and avoid falling into a hole. Other creeks have more than one drop in and more than one exit. Which one you take depends on where you think it’s easier to cross – where it might be shallower or the bottom firmer. Sometimes you might hug one bank for a while before turning across to the exit.

Sometimes it’s quite technical, and can take lots of walking and discussing options.

Which can be very interesting when you’re female and you’re the one doing the driving.

Off road driving, particularly things like the Old Tele Track, is a real boys’ own adventure. It’s almost a rite of passage for some blokes to drive something like this. And there is an expectation that if there’s a bloke in the car he’ll be the one driving.

It’s OK to let the missus drive across one creek, but it’s a bit weird for you to let her drive the whole thing. And that really is how it’s viewed. More than one person actually said it to Doc

“You’re letting the missus drive this one.”

As if I need permission!!! And I got similar comments from blokes at crossings.

“So you’re driving this one”

Or, if they’d seen me drive the previous crossing it might be “who’s driving this one?” 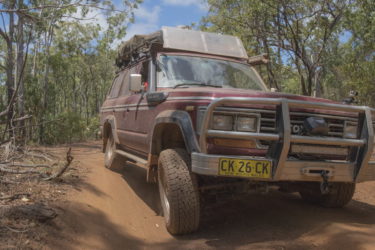 I’m sure this won’t come as a shock to any woman reading this, but it can be very difficult for some blokes to get their heads around a woman driving a track like this

And that’s no more so than when you get to Logan’s and Nolan’s. Both long, deep, crossings. A lot of people turn off before they get to Nolan’s, it’s famous for drowning cars. Lots of them, every year. It’s not only deep, it has a soft, sandy bottom.

And it’s another one where people camp and hang around to watch the action.

I’d already done Canal, Sam, Mistake, and Cannibal Creeks the day before. And they got worse with each one. By the time we camped at Cannibal Creek I was exhausted. That was a very steep drop in, easy crossing, then very rutted, soft, sandy uphill exit. 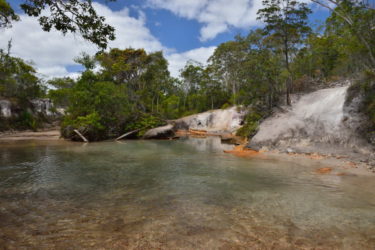 I looked at it and just thought “not another one”. But I had to keep going. I’d gone too far to turn around and go back. Besides it was even more difficult going the other way!

Doc had been variously photographing and filming the crossings as I did them, or guiding me around the deep holes. But this time I wanted him in the car with me. I was a bit nervous about the entry. I took it slow, and controlled, with Doc giving encouragement. Then the car started sliding – gravity and slippery ground will do that.

“Slow down” said Doc “take it easy.” “Nothing I can do about it.” I said “The car’s just sliding.” All I could do was control the direction. But at least it wasn’t like the Gunshot entry, and the car levelled out at the bottom. 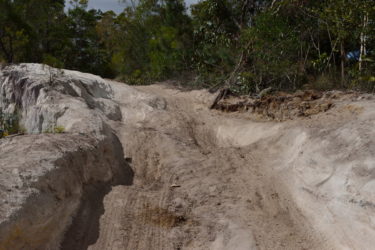 Deep breath, and across the creek. I looked at the exit and wanted to cry. It took me right back to the Simpson Desert and trying to get up rutted sand dunes. This wasn’t as tall or steep as the dunes in the Simpson, but the ruts were much deeper. All I could think was “thank god I’m in the Cruiser and not the Suzuki.” Still, it took me two goes to get up the exit. The next car is definitely getting lockers!

But now we were at Logan’s, and after walking it, deciding a line, and setting up the recovery gear in case I got stuck, I was asked, again, “so who’s doing this one”. There is no way I was going to let it beat me! 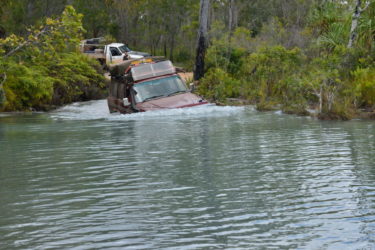 I think I made it across that one through sheer willpower. I dropped in, the water came up over the bonnet, “don’t panic, you can do it”. There was a slight pull in the soft sand at one place, but I kept going. And made it out. Without getting my feet wet.

Nolan’s was a bit of a let down after that. I didn’t even mind that I got stuck and had to be snatched out. It made for much better footage anyway. Particularly when the snatch strap dropped off my car while my rescuer was running it across the creek, with all the people on the bank shouting at him that I wasn’t connected. And then again when I opened the door and the water poured out just like in the cartoons.

The celebratory Moet afterwards, while sitting on the bank watching other people set up winch blocks and getting pulled through, made it all worthwhile.

As did making it all the way to the old crossing at the Jardine for a picnic lunch the next day. I wasn’t even tempted to try to cross there!

After 4 ½ days on the Old Tele Track, it’s time to head towards the Jardine ferry and Pajinka (the Tip). 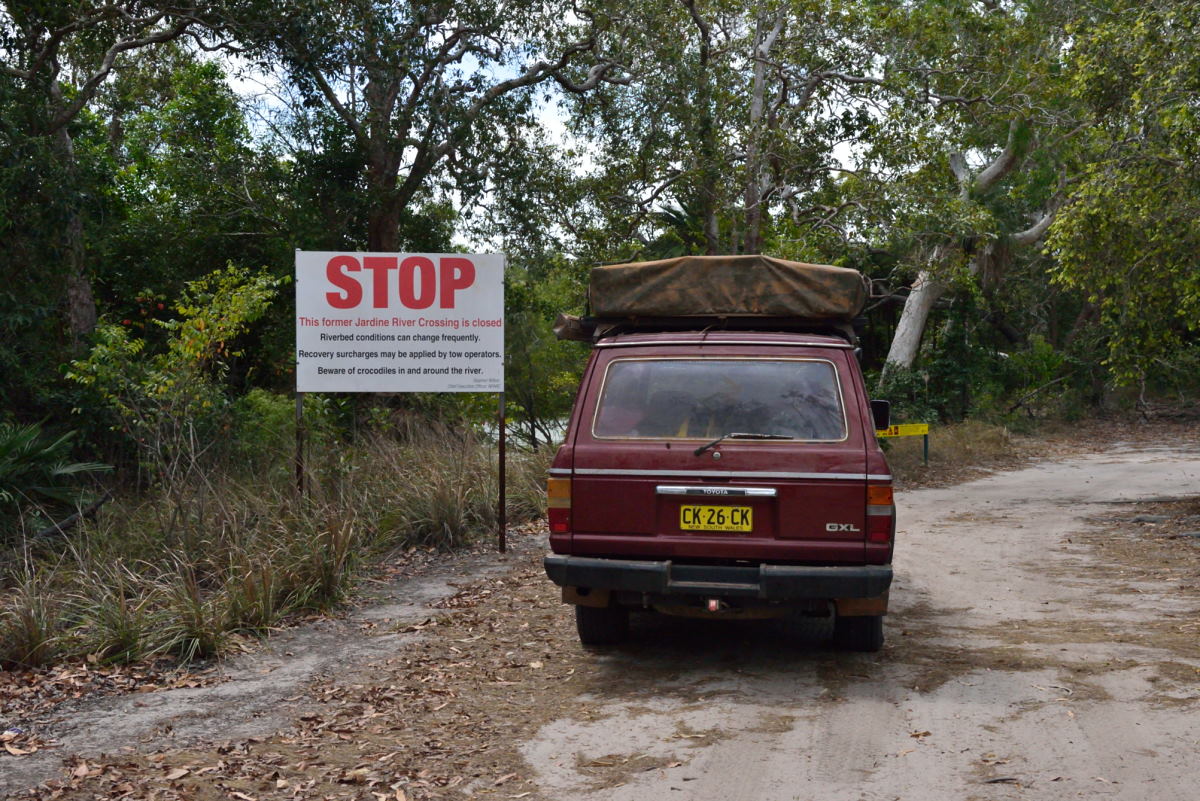