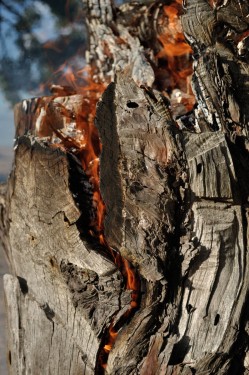 On our last visit to the farm Doc decided to try out a trick he heard about burning a log from the inside.

If there’s one thing we’re not short of on the farm, it’s old logs. So we got one that we had lying around for the campfire, stood it upright, cut grooves into it long-ways from the top, and lit a fire on the top.

Doc said he’d heard that this is a good way to have a campfire when you don’t have much wood, and it gives you something solid to stand pans on to cook over the fire.

But, our motto is never give up.

The yard in front of the house has a few stumps that are stuck so deeply into the ground you’d need a tractor to pull them out. And yes, I know farms have tractors, but we’d never actually got around to getting one out to the house in order to do it.

So, for years these stumps had just been sitting there. Taking up space. Nobody had even cut the top flat so we could use it as a table.

Can you think of anything better on a lazy afternoon than to light a fire in a stump and see if you can burn it out?

No, neither could we. 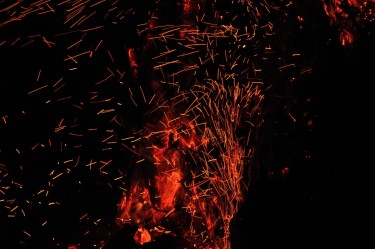 The log we picked was the biggest one in the yard (of course). Doc chopped some grooves across the top in the shape of an X – not too difficult as it had been sitting there for many years so was at least a bit soft. Well, soft at the top at least, not so much a bit further down. This time he cut the grooves deeper and wider than the previous attempt, to give the fire more air & kindling to start.

We carried some coals over from the campfire and laid them on top.

And that was it.

The softness of the rotted wood made it much easier to light the fire, and much easier for it to take hold. 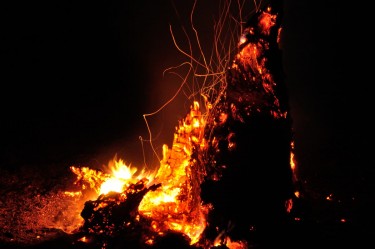 It burned all afternoon, and all night.

It was still smouldering when I got up the next morning – enough for me to make coffee.

And now the yard is clear.

Well, almost. There’s a couple more stumps to burn out next time!