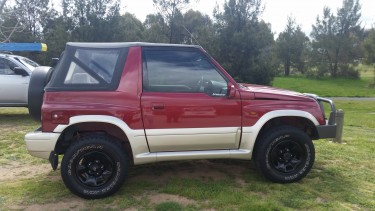 I said I was going to do it, and now I have.

Doc found it for me. He is, after all, the car person in our relationship.

When we first started talking about a new car for me I said I liked the look of a Mini Moke, or a Rav 4 (the old ones, with the soft top). Sadly, neither of those have low range, so Doc suggested a Vitara. And it was a good suggestion, just what I was looking for. So we started to look on-line.

Of course, he had some conditions: It had to be a 2l (the 1.6 isn’t powerful enough), with low ks (he didn’t want to have to do too much work on it), and a manual (I want to do some real 4WDing, and I like manuals).

Have you ever tried looking for one? I challenge you – get on line and see what you can come up with. There are a lot of Vitaras, but they’re either 1.6l, or they’re auto, or they have lots of ks.

Well, I found the perfect car. It had everything, and it looked nice and clean. Sadly, it failed on a new condition Doc hadn’t told me about. It had been driven on beaches, where there’s salt, which makes the car rust. 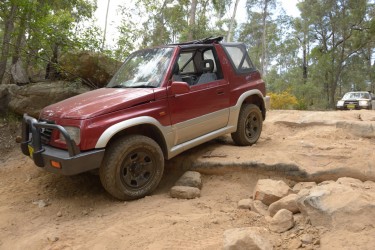 So I did a new search, and a few days later I found another car. But when Doc rang up about it, it had a clunk in the engine, so that was no good.

Then a week later I found another one. But it had something wrong with it too (I’d stopped listening to the technical jargon by now).

Finally I handed it all over to him. “You look, and when you find something good enough I’ll buy it” were my instructions.

So he did. And he found one. The only problem was that it was in Canberra (we’re in Wollongong). But hey, what’s a few hundred kilometres when you want to look at a car? At least they don’t have salty oceans and beaches in Canberra.

So we took off one Saturday morning (after the rugby had all finished, it is after all World Cup time), and drove to Canberra to have a look at a car. As you do. And we bought it. But before I could drive it home it had to be insured.

“Did you call your insurance company yesterday?” asked Doc

“What insurance company?” I replied. Yes, I know. I’m really slack about things like that.

So Doc organized some insurance for me as well. Neither he, nor the seller, were comfortable with me driving all the way back to Wollongong without insurance.

“What if something happens?” they both said in unison.

Nothing happened, and we made it home. But then we had to decide how to set it up.

Sunday morning we had coffee in bed.

“What’s on the agenda for today?” I asked 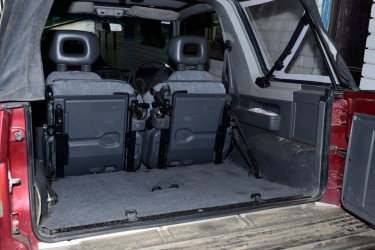 That took almost all day.

Next step is to cut out some corflute and lay it out in the back to see how much room there is. Then we might build a lego model so we can move things around. I want pink lego bricks. For a girl’s car. I might even download some “check how you can set up your 4WD vehicle” software and do some computer modelling.

And then, one day, we (that’s the royal we, I actually mean Doc) will start work.

If anybody has set up a Vitara your suggestions, or “do NOT do this” feedback, are welcome. The car already has a winch bar and lift, so other things I’m looking at are:

And then I can go outback. All by myself, in my adventure car. Where to first?