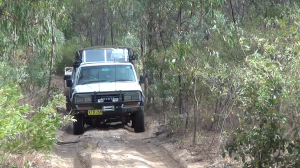 Last time we were at the farm I had my first official 4WD lesson.

I have done some 4WDing before. Doc sometimes lets me drive across creeks or washouts when we go away, but, as the Cruiser is his baby, I’m not allowed to drive it too much. I’m definitely not allowed to take it away on my own!  He’s worse than a helicopter parent with a ‘talented’ child. 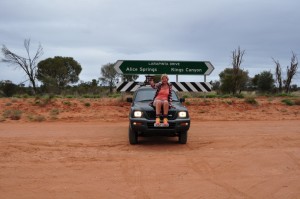 When I do travel without him I take the big black Triton ute. It’s only 2WD, but it does have lift so looks like a 4WD drive. And I treat it like one at times. I have taken it on a few roads designated 4WD only, but only after discussing it with locals who know the roads – and after letting people know where I’m going. I have been bogged in sand a couple of times but mostly I’ve done OK.

Now I’ve told Doc I want more 4WD experience (and a 4WD vehicle), so he’s giving me lessons (but not the Cruiser).

His first lesson, and his reason for giving me the Triton to take away (yeah, right) is that for most things you actually don’t need 4WD. People get scared, or macho, and use 4WD where they don’t really need to. 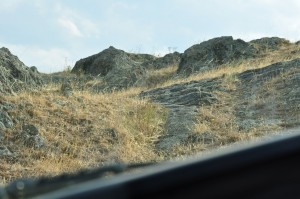 His second lesson is where we started to disagree. I said I wanted to learn to drive in sand (where I’ve been bogged before), and mud (also very soft). He insisted that the first thing I need to learn is to drive over rock.

As he was in charge I acquiesced, and he suggested a trip down to the dam. An easy trip for leaners he said. Well, maybe from his perspective!

I’ve done this before on the quad, and it’s scary. There are rocks, drop offs, steep angles, and – after the rain – mud. So much mud that we got bogged coming into the farm in the Cruiser. There’s nothing like starting at the top!

But if I could do it on the quad, doing it in the car would be easy. After all, it’s a lot more stable and you’re protected by sides and a roof.  So off we went.

The first part is really easy, along the ridge top. 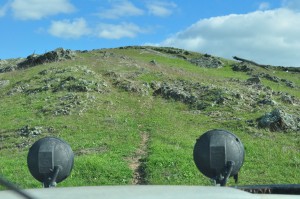 With all the rain and the new green growth our old tracks weren’t visible, so I had to pick out our line again. I think Doc has a thing about dead trees, every landmark is one. I hope they don’t fall over too soon!

Then we got to the rocks and that’s where I learned that while being able to see how steep the angle is makes it terrifying on the quad, not seeing the line at all over the bonnet of the Triton is just as bad. Shit! My apologies here – I was concentrating far too hard on the way down to even think about taking photos, so these photos were taken on the way back up again.

We stopped the car and got out to have a look. First thing I noticed was I’d stopped too close so didn’t really leave enough room to change my approach if I needed to. I walked over the rocks on the drop off, checked the width of the car and exactly where the wheels should go. Unfortunately the gentlest slopes didn’t match up with the car width, so one of the wheels was going to have a sharper drop off than the other. I worked out the best place for one wheel and got back in the car. 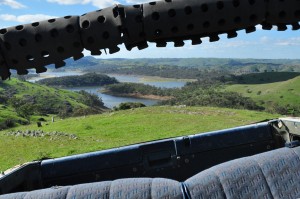 As soon as I started the car and inched forward I realised I’d worked out where the left wheel should go, and I couldn’t see that from the driver’s seat. Der!

So out I got again and worked out where the right wheel needed to go. Down the steeper bit!

By this time I was right at the drop off, and that’s where I ran into my next problem.

I was now right on top of the drop off so had no choice left. Do it Doc’s way, or go over with absolutely no control over the car at all. I took a deep breath, let the clutch out and took my foot off the brake.

And the car crawled forward slowly in first gear, and walked down the rocks. 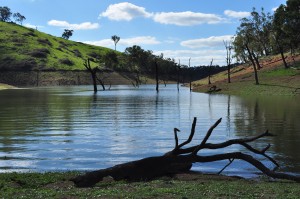 I was so relieved that, I’m sorry to say, I giggled. But it wasn’t yet time for celebration. I had to do the next drop.

I stopped the car again, a bit further back this time to allow for mistakes, and got out and checked where I was going. I even lined up with the right wheel.

This time the difference between the wheels was greater, and the car tipped at what felt like a 60o angle – sideways – while going over. The display on the dash said it was nowhere near that, but I don’t think it works properly.

But we were early there, only one more to go, and then we were on the last, steep, slope down to the dam. That might be 45o, but at least it’s straight down, and it wasn’t even too muddy so we didn’t start skiing.

Once down it was very peaceful and the water wasn’t too cold to have a refreshing swim to wash the sweat off.

Which was just as well, because I still had to drive back up again!