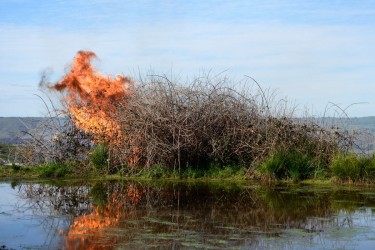 I finally got away for a weekend. No work, no nothing.

After a winter of working just about every weekend, with only enough time out to go 4WDing one day, we had a whole weekend to ourselves. Doc took Friday off, and we went out to stay on a property in rural NSW.

Just us, and lots of space.

Doc isn’t the type to just sit around and soak up the silence, so of course he had to do something to try to help out on the property. He decided the best thing he could do would be to clean up some rubbish in the paddock next to the house. And the best way he thought he could do that was to burn the blackberry bushes that had been poisoned.

I’ll say that again – Doc decided to set fire to the blackberry bushes in the paddock next to the house.

A bloke, a jerry can of petrol, and dead blackberry bushes. What could go wrong? 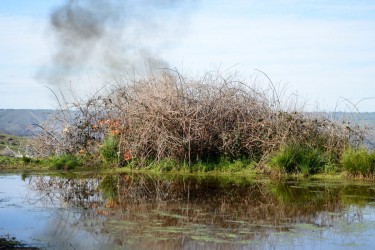 It all started innocently enough. We were sitting talking about how much water was around, and that it was good that the dam was full.

“And those other blackberry bushes near it. We should get rid of them too. Make sure they don’t grow back.”

Now, I know blackberry is a weed and the bane of many farmers’ existence, but I wasn’t sure about setting fire to it. There’s quite a lot of it in the paddock, and I had visions of the whole 200 acres going up in flame! 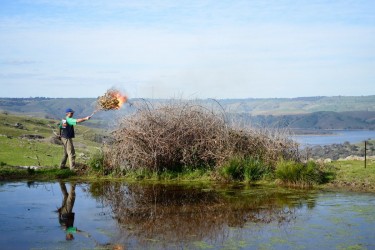 But Doc, ever the optimist (or big kid getting excited about a big fire) jumped into the car and drove the 70m to the dam, with a trailer load of kindling and a jerry can of petrol, just in case.

Being safety conscious, the petrol didn’t make an immediate appearance. First it was just Doc, a lighter, and a big dead blackberry bush. Well, almost dead. There appeared to be some new growth right at the base of the bush.

And that was the problem. 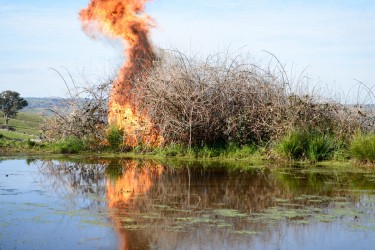 The top of the blackberry was completely dead. Bare, brown branches that looked like they’d catch fire in an instant. But down below it was different. It was wet, very wet. Which, if we’d thought about, would be logical given the dam was full and I needed gum boots to walk across the soggy ground.

But did that deter Doc? Of course not! 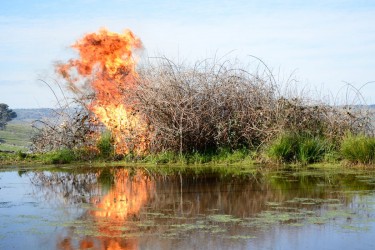 At one stage he set fire to a gum branch to set fire to the blackberry bush. But nothing.

Then he got out the petrol.

He threw some petrol onto the bush and lit a branch. There was a spark, a flame and a huge roar of fire. Then it fizzled.

So he did it again.

He threw some petrol onto the bush and lit a branch. There was a spark, a flame and a huge roar of fire. Then it fizzled.

It was great for taking photos, but somewhat frustrating for a fire bug. 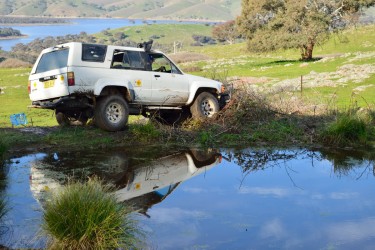 That’s when he decided that what it needed was for the bush to be compacted. How would it catch fire when the branches were so far apart that the flame couldn’t take hold?

So how do you crush a blackberry bush?

Driving over it of course.

In a car with a fuel tank. While there are still a few sparks left on the bush.

I had the camera ready. All I had to decide was if I was going to stop shooting and get help when the car went up in flames. I couldn’t quite remember how much Doc was insured for and whether he was worth more to me dead or alive. But I knew the photos would be good! 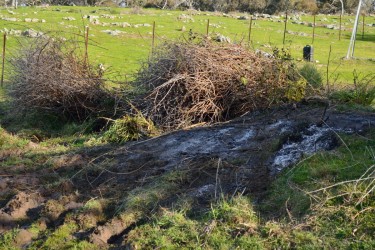 So I crouched, I focused the camera, and I got ready.

But it wasn’t to be. Any fire left in the bushes just wasn’t enough. So no big roar of flames or exploding fuel tanks. Not that I want to see anything bad happen to Doc, but it was a bit of a let down really.

He got me all excited, only to back off at the end and not see it through to its logical climax.

But finally, the blackberry did burn, and the dam does look better for not having it there.

Now the grass just has to grow over all those wheel ruts in the mud!