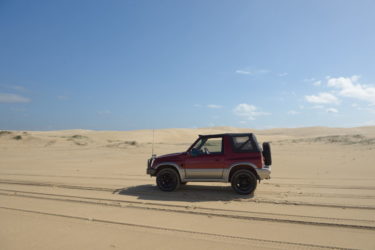 “Driving on the beach is different to driving in the desert” said Doc “See if you can stay in the other tracks.”

Great advice, if I could identify which set of tracks he meant.

We were on the beach at Stockton. Around 17km of driving over mainly soft sand, with dunes stretched tantalisingly alongside you as you drive along the beach. Tantalisingly, because that’s what I wanted to practice – dunes – and that’s where you aren’t allowed to go. 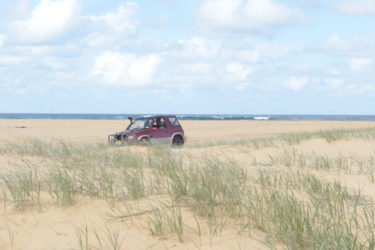 “Stay in the main set of tracks” he said again while I struggled to keep the car in anything resembling a straight line.

“Now, what do you notice about the beach?” he asked. As if I could concentrate on noticing anything at all other than keeping the car straight. But I tried.

“There aren’t as many cars here as there were last time.” “Yes, and what does that mean?”

“It’s not summer anymore” Doc and I took his car to Stockton in January. As my Christmas present. “And what does that mean?” 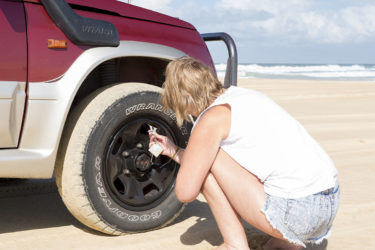 “The weather is cooler, so the sand will be firmer packed?” “Perhaps. What else?”

“There’s nobody here to pull me out if I get into trouble?” “Bingo. And what does that mean?”

If there’s one thing Doc has taught me, mainly by showing me youtube videos of what happens if you don’t follow the rule, it’s don’t go too near a rising tide. A rule very well demonstrated by some young blokes later that afternoon, but I digress.

Besides, I don’t think getting caught in a rising tide will be a problem on the Simpson. 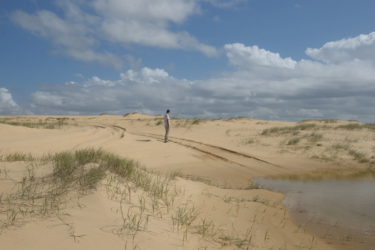 Still, it’s a good lesson and it meant that I was driving in the soft sand rather than the firmer sand below high tide mark. And struggling to keep the Suzuki straight because I couldn’t get both sides of my car into tracks left by vehicles much bigger than mine.

While there are advantages to driving a small 4WD, following somebody else’s tracks is not one of them.

“Woooh. Throttle control. Slow down when you cross over somebody else’s tracks. You’ll shake the shit out of the car, and you don’t want something to break when you’re in the middle of nowhere.” 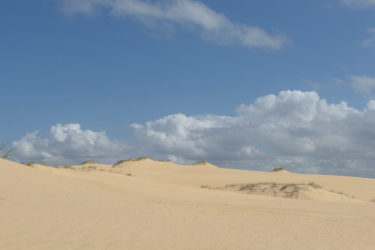 “More revs. You need momentum to get through. Sluggish is the enemy of sand driving.”

“Really pull on that steering wheel. You need to make the wheels bite to get the car to turn across the tracks or it will want to stay on the easiest course.”

“Don’t oversteer. You need to give it time to turn. When the tyre pressure is low like this the car will respond a lot slower.”

I wasn’t the only person confused by this advice. Even Doc noticed that it might have appeared contradictory. “It’s really hard to explain” he said “I’ll have to show you what I mean.” 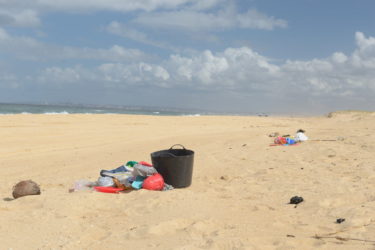 One of the things that I often complain to Doc about is that he is such a careful driver I can’t get any good action shots when we’re away. I just discovered that that’s because he is driving his own car. It’s a bit different when he’s driving somebody else’s (ie mine). Though he didn’t go into full rally driving mode because he is still responsible for fixing it for me! 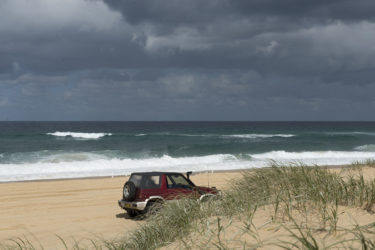 And on our last trip back, as a storm was rolling in, we stopped for a while to watch the young blokes try to get their broken down car off the beach, or at least away from the incoming tide!

Frustratingly, annoyingly, we also saw a lot of rubbish left on the beach, and vehicle tracks over and behind dunes. There are signs all along the dunes, as well as notification on the pass to get onto the beach, telling people to stay on the beach front. Yet … I’d bet my last dollar that the people who have such total disregard for the environmental and the requests of the indigenous carers of the land will be the ones who scream loudest when driving on the beach is banned altogether.

We did discover one of the biggest advantages to driving a small car. It wouldn’t get bogged. We tried, and the car did stop going forward, but it easily reversed out of trouble and then kept going when put into the right gear.

Now I’m sure that when I’m in the Simpson, driving on my own, I will get stuck at some point. But at least I know now the car is easily capable of getting out of trouble, and going on through soft sand. And I learned to not keep going and dig myself further into trouble when I do get stuck.

And as Doc pointed out, I will have a lot of dunes to practice on in the desert.