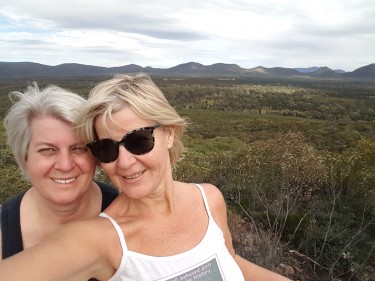 I’ve walked 36,000 steps over 24km, and climbed the equivalent of 98 floors up two mountains, over the last two days. Yes, my sister has a fitbit.

I mocked her mercilessly for being a yuppie, then kept asking how many steps I’ve done and how many floors I’ve climbed. 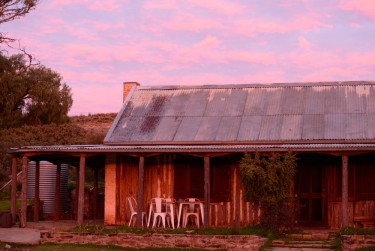 It’s been an interesting exercise given my love of social media, and that one of my rules is whenever you are going out of a service area let someone know where you are going and when you will contact them again. I really didn’t expect to be out of a service area here, in a major tourist area that is really not that far from Adelaide. But I was only out of service for 1 day at a time. I’m not sure that anybody noticed.

I got service at Parachilna, where we sat outside the pub and watched the sunset over the Ghan tracks, then had dinner at the pub. That was our reward for doing 20,000 steps that day.

From the front, the Parachilna pub (aka the Prairie Hotel) looks like a standard outback pub. And the front bar is a standard outback pub bar. But once you get into the dining room, things change. I had a choice of 4 vegetarian dishes that weren’t just chips or salad. Risotto, pasta, a tomato and eggplant terrine, or a polenta stack. I picked the last one and it was amazing. My sister had harissa goat stew with pearl barley, and we shared a bottle of Wicks sauvignon blanc – again not on your standard outback pub wine list. 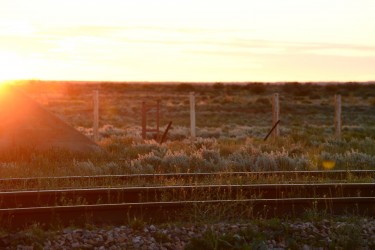 It’s well worth a visit if you’re in the Flinders. The hotel rooms at the back are also renovated beautifully so you can even stay there. The cottage we’re staying in at Blinman is owned by the Parachilna pub and renovated in the same fashion. It’s very comfortable, and they haven’t paid me to say that.

I also got service at Wilpena where we did a 7.8k walk, 800m of which was almost straight up, over rocks, to the lookout into the Pound. Of course, after we looked at the view there was 800m almost straight down again, but that was much easier than going up. I will admit, I whinged a bit. Well, more than a bit. And kept asking how many floors we’d climbed. 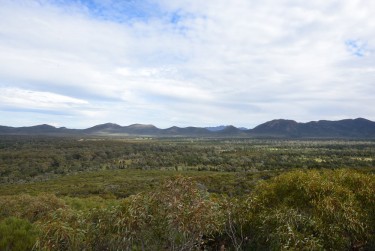 Apparently, early pastoralists climbed the mountain, looked into the Pound and thought “this would be a good place to run cattle and sheep”. 120,000 of them at a time, though the number was decided by the government rather than the pastoralists. As it turned out, it really wasn’t a good idea as the stock ravaged the land, and the drought/flood cycle of Australia made it all totally unsustainable.

A combination of National Parks service and local Aboriginal organisations has put a lot of effort into improving the land management in the Flinders and restoring the natural vegetation. And it is looking beautiful. There are a lot of wildflowers out already, and lots more ready to burst into flower as soon as spring comes. If you can get here around September, come along. You won’t be disappointed. 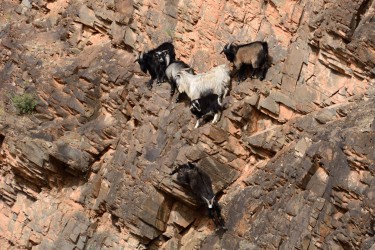 I have discovered where all those goats that I didn’t see when I entered South Australia are living. They’re all in the Flinders, happily jumping up rocky mountains. We have seen them everywhere on our walks.

We’ve also seen wallabies, kangaroos, and emus. Though no quolls despite the signs telling you to watch out for them on the roads.

There was even a kangaroo right outside our door when I opened it this morning to see the sunrise. We both stood there looking at each other for a minute or so before it hopped down to the front fence and waited while I came outside and watched a beautiful, red sunrise.

Now I think I’ll go for a walk to see what’s around the house we’re staying in. And get my step count up.